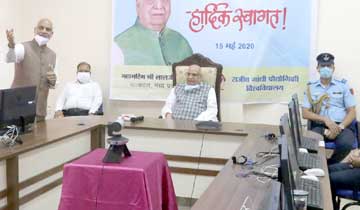 By India Education Diary Bureau Admin On May 16, 2020
Share

Bhopal : Governor Shri Lalji Tandon today reached the Rajiv Gandhi Proudyogiki Vishwavidyalaya to boost the morale of creative developers for working during the lockdown period. He held a discussion with the online developer team and sought information about their experiences and future plans. He cheered them.

Governor Shri Tandon said that success is certain if we have the will power and inclination. Software development is the evidence of exploratory learning during the challenge of lockdown. The software has been built with the challenge and limited resources of Covid-19. This feeling is the basis of the power of success and the eternal possibilities of a happy future. He said that the economic base of excellence is temporary. The store of knowledge is the source of excellence. Prime Minister Modi has called for accepting the crisis as an opportunity. This is the time for youth to use their intelligence. This is the right time to create a new history of self reliance. There is no shortage of technology, methods and resources. There is a need to resolve to accept the challenge.

Shri Tandon said that universities are centres of building the future. Software developing is a revolutionary work. This has revealed immense possibilities for a secure future of self-reliance. In addition to being self-reliant, universities can develop new sources of income by using software expertise professionally. This technical proficiency will strengthen the knowledge base. New experiments in quality, education, culture in academic possibilities will pave a new way for improvement in the economy. In an online discussion with the young software team, he wished them a bright future and said that their contribution is a milestone. He said that they have sown such a sapling that will grow and have a multifaceted effect on the country and society in future.

Secretary to the Governor Shri Manohar Dubey said that immense future possibilities have been created with new software development. The basic form of educational system may change. New hypotheses can be conceived in fundamental systems like teaching, examination system. He said that universities have got direct contact facility with 24 lakh students. Innovative possibilities such as determination of test result based on maintenance of study hours can also be considered. He said that the motivation, protection, trust of the Governor provided a positive atmosphere towards work which is the basic element of success. He also referred to the cooperation of the Universities in taking the bold steps to take up the developing work by the Vice Chancellor of Rajiv Gandhi University of Technology and to prepare the functional requirement system.

Vice Chancellor Shri Sunil Kumar informed that the creation of university management software amidst the challenge of the lockdown, is the beginning of the new work culture of Work from Home and the beginning of new era of self-reliance of universities. He said that the fee paid by the students which was earlier used up in the private sector will now be used in their educational development. He informed that the software development work has been undertaken by a 20-member team.Ten of its members are students of the university. The remaining 10 are ex-students.

Governor Shri Tandon held a discussion with the members of the software developer team on the occasion. Software consultant Shri Hemraj informed that no integrated project of the universities is being run anywhere in the country. He told that this software is made with corporate feel. Developer Shri Nema said that this is a comprehensive software. Nitesh said that latest technology has been used in the software.

Art of Living with coronavirus is the new normal: Nitin Gadkari