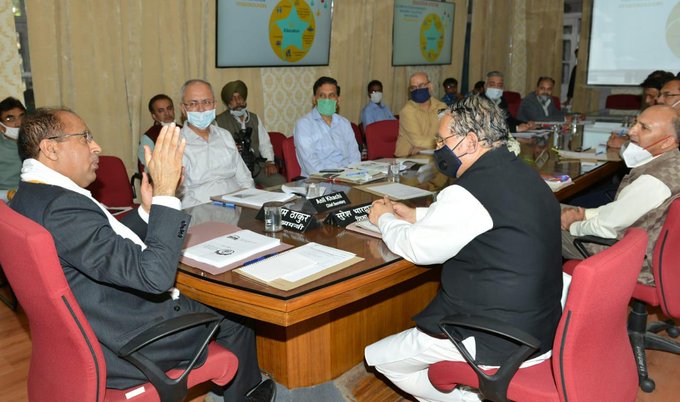 The Chief Minister said that State Government has constituted HP State Higher Education Council under Rashtriya Uchchatar Shiksha Abhiyan (RUSA) to look into overall development and growth of HEIs. He said that State Project Directorate RUSA was working to improve the access, equality and quality status of higher education in the State. He said that since the RUSA grants and funds were linked to NAAC accreditation, therefore, it leads to a healthy competition among the different colleges and would certainly motivate for NAAC accreditation.

Jai Ram Thakur said that Sardar Vallabhbhai Patel Cluster University Mandi has been set up as per RUSA guidelines. He said that government of India has approved Rs. 55 crore for this university out of which 27.50 crore have been released to this university. He directed the officers to expedite work on it so as to facilitate the students. He said that Rs. 92 crore had been approved from 2018 under RUSA by Ministry of Human Resources Development, Government of India as infrastructure grants to H.P. University Shimla, infrastructure grants to 26 colleges, New Model Degree College, Lylh Kothi, district Chamba and upgradation of DAV Centenary College, Kothai and Government College Chamba.

Chief Minister said that there were 929 High schools and 1871 Senior Secondary Schools in government sector besides 138 government colleges which were imparting quality education to the students in the State. He said that Rs. 3671.95 crore had been allocated under different components in education sector for current financial year. He said that Rs. 116.37 crore capital budget had been earmarked for buildings and educational infrastructure for the year 2020-21 against budget allocation of Rs. 114.36 crore during last financial year. He said that 1171 construction works had been completed while work on 314 projects was in progress. He asked the officers to expedite the work on construction of buildings and other infrastructure in the educational institutions to facilitate the students.

He said that the the Education department has been ensuring maximum use of information technology for teaching students in the wake of Covid-19 pandemic. He said that various modes such as Doordarshn, Radio and social media were being used to teach the students.

Education Minister Suresh Bhardwaj thanked the Chief Minister for regularizing the services of about 10097 PTA, PAT and PARA teachers serving in different schools of the State. He said that with this the long pending demand had been fulfilled. He said that Himachal Pradesh had been ranked the best State by various agencies.