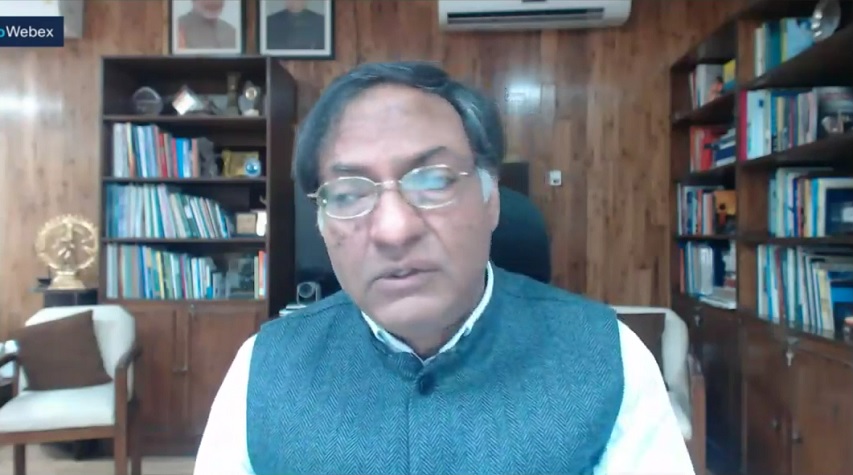 New Delhi: Prof Ashutosh Sharma, Secretary, Department of Science and Technology, Govt of India today said that geospatial technology has made inroads across various sectors in the public as well as private domain in India. It is an effective tool for management, planning, governance, logistics, infrastructure, among others, and that there is a need to fully empower this sector, he added.

Addressing the FICCI National Geospatial Awards Felicitation Ceremony organised virtually, Prof Sharma said the liberalisation of policies, announced by the Government of India, in governing the acquisition and production of geospatial data is a move that will help in boosting innovation in the sector and create a level playing field for public and private entities.

“Our guidelines to remove colonial legacies for regulating acquisitions in use of geospatial data will go a long way. The guidelines were crafted with care and will empower both the government and the private agencies. In this scenario, everybody wins and is empowered, whether the public or private sectors. The goal should be to be able to carry out the mandate and activities without much hindrance. The real winner is the country’s development, whoever can do it with scale and speed,” he said.

Under the new guidelines, people and organisations in India will be free from seeking prior approval, security clearance or license for collection, storage and dissemination of geospatial data and maps. “A more comprehensive and solid policy in the making. I welcome all stakeholders to share recommendations, insights, and advice about various aspects of geospatial data; building on data; and how to bring the entire ecosystem in place to give it full muscle, Prof Sharma said.

“Another important aspect is the democratization of data. Sharing of data and ease to access of data is most important. People fail to realise data is bigger than them,” he further added.

Geospatial technology has made its impact along the length and breadth of Indian e-Governance. “Agriculture, IMD, Town and Country Planning, among others have been GIS dependent for a very long time and the Department of Science & Technology (DST) aims to utilize the power of Geospatial technology to revive various sectors of the Indian economy,” he said.

Lauding FICCI on recognizing and felicitating initiatives towards geo-enablement of the nation Prof Sharma said that there is a further need to recognise people and organisation for their work. “DST made more incubators and has supported more start-ups in the last five years than in the previous 50. We are integrating around 3600 start-ups and hundreds of them are directly related to this (geospatial technology) business,” he elaborated.

FICCI Committee on Geospatial Technologies that has been working towards achieving the Prime Minister’s vision of making India Atmanirbhar. “However, it is the cultural aspect of Atmanirbharta, Atmavishwas, which allows taking calculated risk. We need to empower youth in technology and awards are a great way of recognising and acknowledging talent and the good work that is being done in this arena,” he added.

Stressing on the utility and long-term cost effectiveness of using geospatial tools and technologies, Prof Sharma said that the geospatial industry is set to progress by leaps and bounds in the coming years. “We may very well use the term ‘pole-vault’ to describe the sector’s progress,” he quipped.

“There has been immense progress over the years in technology for the capture of geospatial data through ground-based survey techniques, photogrammetry using manned and unmanned aerial vehicles, terrestrial vehicle mounted Mobile Mapping System, LIDAR, RADAR Interferometry, satellite based remote sensing, mobile phone sensors and other techniques. This clearly signifies that technology has been moving ahead of us, our regulations and processees of doing work,” he said.

Going forward, drone industry is going to be one of the major beneficiaries of the recent policy change. Another area is blue economy wherein geospatial technology is expected to play an important role. Fisheries, deep sea mining, and offshore oil and gas make up a large section of India’s blue economy. India will soon launch an ambitious ‘Deep Ocean Mission’ that envisages exploration of minerals, energy and marine diversity of the underwater world, a vast part of which remains unexplored, he said.

Further, on liberalisation of policies that were recently announced by Govt of India, Mr Verma said that governing the acquisition and production of geo-spatial data is a move that will help in boosting innovation in the sector and create a level playing field for public and private entities.

Mr Dilip Chenoy, Secretary General, FICCI delivered the vote of thanks and congratulated the award winners. He also complimented the jury for their contribution to the success of the FICCI National Geospatial Awards.

“These reforms in the geospatial policy and regulatory environment will certainly unlock potential in the sector and translate into benefits for government, industry, academia and common citizens of India,” he said.