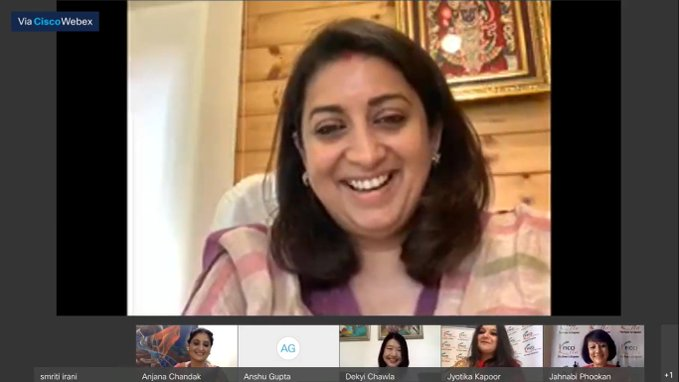 New Delhi: Ms Smriti Irani, Minister of Textiles and Women & Child Development, Government of India today said that the government is in the process of connecting 50 lakh Indian weavers and artisans with GeM portal so that governments across the country can directly procure from them.

Addressing an interactive session organised by FICCI FLO Bangalore Chapter, Ms Irani said, “Additionally, we are working jointly with the NIC to ensure that we have a platform which can help commercialize the potential of our artisans and weavers and there can be a direct sale to the people of India.”

She further added that these artisans and weavers will be authenticated in terms of the output based on their skill and craft by the Ministry. “The future lies in ensuring that the segregation in our supply chains are positioned to find a solution from the technology,” added Ms Irani.

Highlighting the opportunities during COVID-19, she said that there is an opportunity to build and reconstitute the systems that now can be gender friendly. Entrepreneurial opportunities need to be generated microscopically at the grassroots level, said Ms Irani.

“For a nation as diverse as ours, to ensure that there is no mass migration to just few urban centres, we need to create not only economic opportunities but also infrastructure in the rural belts of our country. Today, with this challenge comes an opportunity of not only mapping the skills of our workers across the country, but also ingrain in them the technological solutions which can better their living prospects especially empowering them financially,” said Ms Irani.

Ms Jahnabi Phookan, National President, FLO said, “My first task at FLO, as I joined the office this May, has been to commission a multi-state field study on the COVID-19 impact on women’s livelihoods in key sectors like Agriculture and allied sectors, Handloom & Handicrafts, MSMEs and Tourism. FLO would like to seek partnership with both your ministries to act upon the findings of the study. At the grassroots level, FLO has taken up the mission for each of its Chapters to adopt a village and work for women-led enterprises. FLO wants to work towards skilling and upskilling the rural women as well as migrant women workers returning to their fold.”

Ms Jyotika Kapoor, Chairperson, FLO Bangalore Chapter said that the best thing that has survived in the pandemic is creativity. “Creativity gives a lot of hope and positivity and it can empower many people to think out of the box. One can explore and reinvent,” she added.

Almost half administrative tasks in doctor’s surgeries could be automated