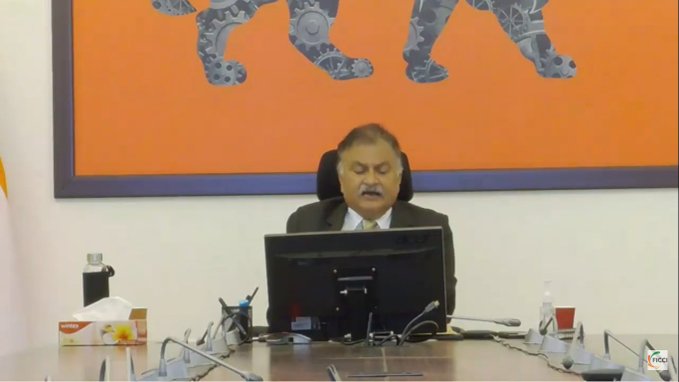 New Delhi: Dr Guruprasad Mohapatra, Secretary, Department for Promotion of Industry and Internal Trade, Govt of India today said that the government is working towards notifying the 10 new PLI Scheme by April 2021.

Addressing the virtual Panel Discussion on ‘Inspired India’ with Secretaries to GoI, at FICCI’s 93rd Annual General Convention, Dr Mohapatra said that PLI Scheme introduced for the mobile will be a gamechanger and will push the electronic manufacturing as well. The government has already launched the PLI Scheme in the medical devices and API sector.

He further said that DPIIT is also working to introduce a single window for investors, which will be connected with various ministers along with their IT systems. Emphasizing the compliance burden, Dr Mohapatra said that the government’s highest priority is to reduce the compliance burden and simplify the procedures that business must follow in certain sectors.

Mr Tarun Bajaj, Secretary, Economic Affairs, Ministry of Finance said that the government’s focus is on the economy. “We are going to see an improved economic condition in the coming year,” he added.

Speaking on the new PSE policy, Mr Bajaj said that there has been some delay in the policy, and it is because we want to create more ambition in the policy. “The policy will be very ambitious, more than what is anticipated. This will bring a paradigm change in the way we think and do things in the government. The implementation will also come along with it,” he added.

I stay positive and motivated when training goes well says…

He added that currently, the benchmarking is different for different universities for infrastructure and other things. “In the National Education Policy 2020, benchmarking will be done based on the same academic and research standards not based on governance. All the universities including the central private state will be benchmarked with the same criteria,” added Mr Khare.

Dr Rahul Chhabra, Secretary, Economic Relations, Ministry of External Affairs said that Atmanirbhar Bharat is not an inward-looking policy; it is strengthening our domestic capacities to enable a level-playing field with our strengths to play at the front foot.

Mr Chhabra also said that 2021 is going to be critical as we will take the membership of the UN Security Council for a 2-year period. He added that the government is working with certain countries to look at resilient supply chain initiatives. Highlighting the role of MSMEs in the global value chain, Mr Chhabra said, “All of our embassies are geared up to look at opportunities that are available. We have around 190 offices across the world and we should the front office for the corporate India.”

Mr Sandip Somany, Immediate Past President, FICCI & Vice Chairman & Managing Director, Somany Impresa Group said that the progressive policies introduced by the government, major infrastructure development plans, large consumer market, all point towards significant headroom for growth to become a strong economy and an enlightened nation, which will be our ‘Inspired India’.

Appreciating Government’s efforts towards Ease of Doing Business in the Sector, Mr Somany added that there is a need for implementation of measures such as single point of clearance/compliance for the new and existing investors, removing redundancies in regulations, moving towards a system of Third-Party Certification and need to digitize all the processes and have a single dashboard and digital lockers.

UNESCO marks 60th anniversary of Convention against Discrimination in Education

ESIC extends date for filing of ESI contribution for the month of April, 2021