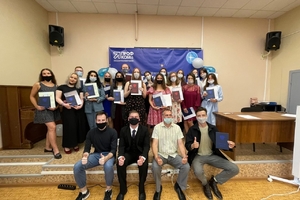 Graduates of the Institute of Foreign Languages ​​received bachelor’s degrees

The Institute of Foreign Languages ​​of PetrSU presented diplomas of higher education to bachelor graduates.
Students of the areas of training “English and German”, “French and English”, “German and English” received 46 diplomas, 10 of them – with honors.

8 graduates of the Institute of Foreign Languages ​​also successfully completed training under the additional professional development program “Forming a career trajectory in the digital environment” and received certificates of the established form.

For many years, the Institute of Foreign Languages ​​has been preparing highly qualified specialists in the field of teaching foreign languages. Graduates of 2021 confirmed this fact with excellent defenses of final qualifying works and high marks in the state exam for the second profile of training.

Many graduates have successfully represented Petrozavodsk State University in various programs and competitions held by the Goethe-Institut, the French Institute in Russia. Most of the graduates of 2021 took an active part in the international language and culture camps held by the institute together with the College of Saint Scholastica (Duluth, USA) and the Lyceum J. Dautet (La Rochelle, France), in the Mini-Referendariate projects and Sprint (Lubeck, Germany) and other international projects.

Director of the Institute of Foreign Languages ​​I.V. Kreneva addressed the graduates, noting:

This event takes place in a somewhat non-standard situation and in an unusual format. However, its significance cannot be neutralized by anyone and nothing.

The director congratulated the graduates on the successful completion of a serious stage in their life and thanked them for their initiative and creative approach in implementing the projects of the institute. During the presentation of diplomas, the most active graduates received letters of thanks.

Heads of the English language department V.O. Pavlov and the department of German and French languages ​​I.A.Kotyurova and other teachers of the institute addressed the graduates with warm wishes. In their speeches, all of them unanimously wished the graduates to find their way in personal and professional life, to carry through the years a thread that connects them all, a passion for foreign languages.

In response, the alumni also cordially thanked the teachers and staff of the Institute of Foreign Languages ​​of PetrSU for the solid knowledge gained during their studies at the institute, for their faith in them and constant support.

PetrSU student in practice at Ponsse