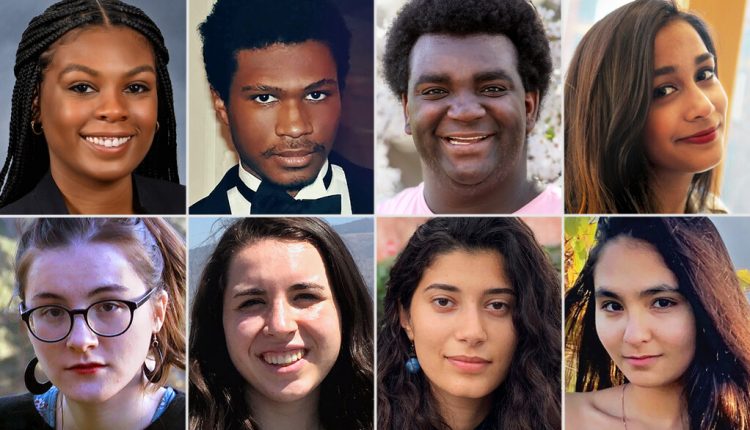 Graduating seniors and an alumna win fellowships for study in the U.K.

Seven new Yale College graduates and one alumna have been awarded fellowships from various organizations for graduate study in the United Kingdom.

These are in addition to students, previously announced in Yale News, who have won Rhodes, Marshall, and Gates-Cambridge scholarships.

The fellowship winners and their awards are:

Reyanna James ’22 has received a Fulbright award to pursue an M.Sc. in development studies at SOAS University of London. At Yale, she was an economics and mathematics major. During her time on campus, she conducted research in both the economics and mathematics departments, served as a peer tutor in math and with the Urban Improvement Corps, and led the corporate sponsorship committee of the Black Solidarity Conference. Additionally, James is a fellow with the Sadie Collective, a nonprofit organization dedicated to increasing opportunities for Black women in economics. Passionate about centering the experiences of Black women in shaping economic policy, her research focuses on the racialized and gendered nature of labor. In London, James will study the impacts of race, gender, and coloniality on global economic development.

Julian Manresa ’22 has been awarded the Paul Mellon Fellowship to pursue a second B.A. in theology and philosophy of religion at Clare College, Cambridge. At Yale, he majored in comparative literature, specializing in Austrian theater, opera, and Habsburg cultural history. At Clare, he will study German idealism and its manifold Platonic, Kabbalistic, and Christian mystical overtones. He will also explore idealism’s deep roots in German Romantic literature. At Yale, Manresa was a member of the Yale Glee Club, performed with the Opera Theatre of Yale College, held office in a Yale Political Union party, and sang the part of a devil in a professional cast album of an original student musical.

Evan “EC” Mingo ’22 received the Sidney Hellman Ehrman Studentship to fund his Master of Philosophy in the sociology of marginality and exclusion at King’s College, Cambridge. He graduated from Yale with a B.S. in psychology with distinction as well as a B.A. in ethnicity, race and migration with distinction. At Yale, Mingo has been committed to uplifting the experiences of intersectional people, where he reactivated BlackOut, the Black LGBTQ+ student organization. He also served on the house staff for the Native American Cultural Center, where he coordinated programming on Afro-Indigeneity and anti-Blackness in Indigenous communities. This year, Mingo served as an inaugural coordinator for the Coalition of Allyship Advocates, the newest peer-education group for diversity, equity, inclusion, and justice work supported by the Yale College Dean’s Office. He served as a research assistant in Professor Jennifer Richeson’s Social Perception and Communication Lab, as well as for Professor John Pachankis at the Yale School of Public Health. After studying in the U.K., Evan plans to obtain a Ph.D. in clinical/counseling psychology to further his career in research and activism.

Sarah Pitafi ’22 will attend University College London as a Fulbright Scholar to obtain a master’s degree in philosophy, politics, and ethics of healthcare. At Yale, she was an ethics, politics, and economics major. Her senior thesis explored the ethics and efficacy of establishing COVID-19 vaccine mandates at universities like Yale. Pitafi has served as a policy director for the Yale College Council, a treasurer for the Yale Hunger and Homelessness Action Project, and as a volunteer at the HAVEN Free Clinic. She has also held several research positions, including at the Yale COPPER Center, the Yale Department of Political Science, and in the pediatrics department of Washington University Medical School. In her Yale research, Pitafi investigated how to improve equity and accessibility in cancer care through community-based and holistic interventions.

Claire Saint-Amour ’22 has been awarded a Paul Mellon Fellowship to pursue an M.Phil. in classics at Cambridge University. As a graduate student at Clare College, Saint-Amour will write a dissertation about the trope of buried and embedded texts in Greek, Roman, and Mesopotamian literature. A classics major at Yale, her undergraduate research explored the relationships between landscapes, people, and stories in Greek and Roman literature. She hopes to continue to expand this work at the postgraduate level. Saint-Amour sang with the Yale Slavic Chorus and served as its musical director in fall 2021. She also worked as a peer tutor in Latin and Greek.

Raquel Sequeira ’21 has been awarded the King’s-Yale Fellowship to pursue an M.Phil. in the history and philosophy of science at Cambridge University. At Yale, she majored in molecular biophysics and biochemistry, played club soccer, and sang in the Yale Glee Club. At Cambridge, she plans to explore meta-scientific questions through the fractal-like connections of science, philosophy, literature, and theology. As founder of the Yale Shakespeare Club, Sequeira is particularly fascinated by early modern epistemological upheavals, as well as current issues around the role of scientific knowledge in society.

Salma Shaheen ’22, an international student from Hebron, Palestine, received the Henry Fellowship to earn a M.Phil. in development studies at Oxford University. An economics major at Yale, she was awarded several fellowships to research the effect of conflict-induced mobility restrictions on the gender gap in wages and schooling in Palestine. Her senior thesis estimated the effect of conflict on child labor in Palestine. At Oxford, she hopes to focus her work on the gender differentials in the impact of conflict on child labor in Palestine. At Yale, Shaheen worked as a research assistant for Professor Rohini Pande, an economics peer mentor, and a macroeconomics peer tutor. Shaheen founded Yalies4Palestine to advocate for Palestinians’ rights under the Israeli occupation. She also served on Yale’s Advisory Committee on Accessibility Resources, for which she was recently awarded Silliman’s Diversity and Inclusion Award.

Laurie Chan Yousman ’22 has been awarded a Rotary Global Grant to pursue a M.Sc. in global health sciences and epidemiology in Oriel College at Oxford University. At Yale, Yousman double majored in the history of science, medicine, and public health, and ecology and evolutionary biology. She is the varsity coxswain and four-season member of the Yale men’s lightweight crew team, winning the Head of the Charles this fall, leading the first boat to an undefeated regular season this spring, and winning the Ivy League championship at the EARC Sprints. During her time at Yale, she conducted research on disparities in access to healthcare for Medicaid and uninsured patients and was president of Art to Heart, a student volunteer group in the Yale New Haven Hospital pediatric emergency department. Outside of Yale, she co-founded the nonprofit Crew Haven, the first ever free rowing and academic support program for public school students in New Haven. Yousman hopes to utilize her time at Oxford to continue to advocate for underserved populations and improve their access to healthcare.