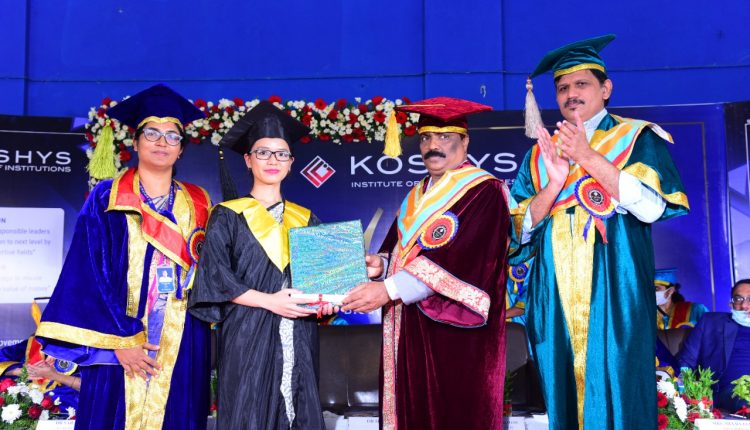 Dr. Ramakrishna Reddy, Registrar, Evaluation at RGUHS, Bangalore in his address congratulated the graduates on receiving the degrees and remarked, “the importance of Nursing in the society & in the world, insisted that the knowledge and skills, honed by this institute, could make a difference in their career. The recent initiatives taken for the welfare of the nursing students studying under RGUHS were explained in details to the students by the chief Guest.

Dr. Santhosh Koshy, Chairman, Koshys Group of Institutions, congratulated the graduates and explained the graduates the practical difficulties faced by a nurse during her career meaning “more responsibility with less authority “& also the blessings that each nurse receives from her clients. The encouraged & blessed each graduate to soar up their wings & fly to their heights in the professional career.

Speaking on the occasion, the Guest of Honour, Prof. Somashekarayya Kalmath, Senate member, RGUHS, congratulated the graduates and their parents for earning a degree in your chosen field and progress towards a successful future. He said that they have received the degree from the right educational institution. May the education that they received be reflected in the actions as they care for the needy in the society.

The graduation was dissolved after Pledge was taken by the successful graduates.

Aahwahan Initiates “Laptop Bank” a Learning Opportunity for the Underprivileged