Welcoming the approximately 300 students and their friends and family was Master of Ceremonies Catharina Nyström Höög, Dean at Dalarna University.

“Dalarna University aims to create pathwayss to knowledge for a good society,” stated Vice-Chancellor Martin Norsell in his address to the audience. “I hope you have found your pathway. A ceremony such as this is a time to think back. You will always remember this day. You did what you set out to do. Be proud of yourselves. Congratulations!”

The Vice-Chancellor talked about the importance of networking for alumni and the bonds of friendship that develop throughout one’s years of study, and about his hope that one day the students would return to the University to pursue further studies, conduct research or teach. In his speech, he gave students two pieces of advice: “Remember to have fun because you will only truly succeed in what you enjoy; and party like there is a tomorrow, because it belongs to you!”

The University has a strong position within the county of Dalarna. County Governor Ylva Thörn expressed her pride and pleasure at being able to be part of the day’s events. University studies can change lives and open doors that would otherwise remain closed. This was explained by former student Cia Embretsen, who graduated in 2015 from the Scriptwriting Programme in Film and TV, in her address to the audience.

She described how her father had only six years of primary education and began working at the age of 12 in forest that he had inherited from his father. The notion of studying was not even considered: that would require money. Cia herself, by way of her university studies, was able to make real her dreams of working with film. 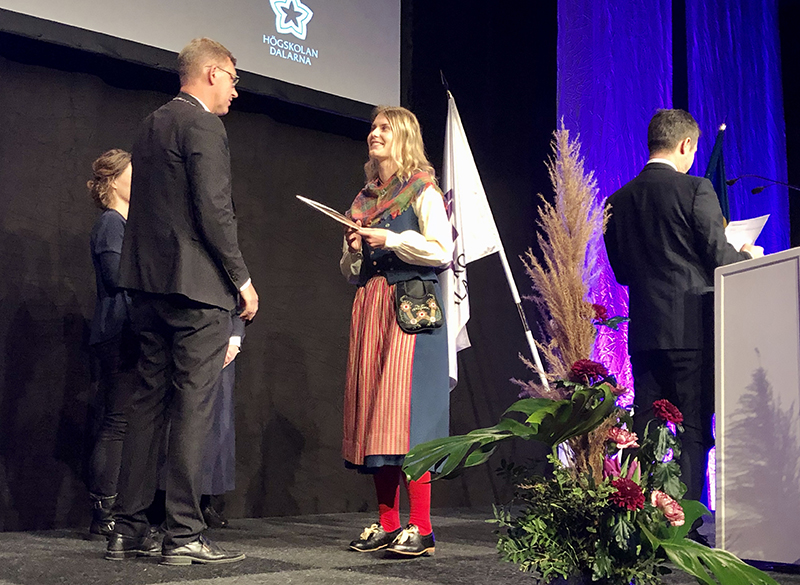 Students from the School of Humanities and Media Studies, the School of Technology and Business Studies, and the School of Education, Health and Social Studies each received a certificate and shook hands with the Vice-Chancellor on the stage with applause from the audience.

When the ceremony was over, students and audience members proceeded to Campus Falun to enjoy the chance to mingle and celebrate further.