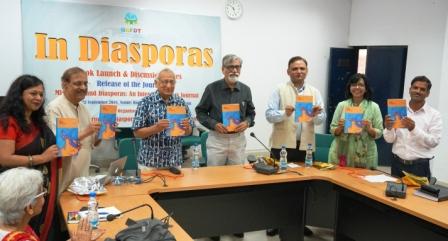 Titled ‘In Diasporas’, the plenary session of the function witnessed some of the interesting observation in contemporary diasporic studies. The editors of the journal, Dr Amba Pande and Dr Sadananda Sahoo, in their introductory speech highlighted the theme of the journal and its need in the contemporary diasporic and migration studies. GRFDT is a new non-profit, academic research organization which has been organizing international conferences and conducting studies and publishing monographs on issues related to Diaspora and migration.

The function also witnessed the launch of Women in the Indian Diaspora: Historical Narratives and Contemporary Challenges, edited by Dr Amba Pande; Through the Diasporic Lens, edited by Dr Nandini C Sen, In Diasporic Lands: Tibetan Refugees and their Transformation Since the Exodus, authored by Dr Sudeep Basu and Identity, Diaspora and Literature: Theorising New Diasporic Consciousness, edited by Nitesh Narnolia and Ms Mousan.

Speaking at the plenary session, Prof Jain said that interdiscipinarity was at the heart of the Journal, which would enable to ‘see’ rather than ‘look’ at the various issues related to diasporic and migration studies. Highlighting the history of the GRFDT and the need of a journal, which was discussed in the earlier meeting, he applauded the GRFDT for making it a reality today. He said that the Journal was a natural progression in the working of the organization at the macro-level. He quoted Bernard Russell saying that the endeavor of academics is to create a dust and then settle it for better understanding of the discourse.

While speaking on the occasion, Prof Harish Narang problematise the very definition of ‘diaspora’ and said that it was the new password of the 21st century. He equated it with humans’ exemplary transnational movement. He said that in diasporic studies, Jews are considered to be the first Diasporic community but if one looks at the history of civilization like Indus Valley and Mesopotamians and at the South East Asian movement of people, one would come across pre-Jews communities who were diasporic in their movement. While talking about Imaginary homeland and cultural distances between the home and host countries, he said that the concept of nation and homeland are new form of treaty between the two entities. While talking about the phenomenon of people movement from Sitamarhi to Scotland and about the Kolkata Coolie and Indians migrating to Pakistan during partition and still called ‘Mujaheers’ were the diverse manifestation of the concepts of migration and diasporas.

Wipro Named as Industry Leader by Zinnov for the 11th…

Ambassador Anup Mudgal (former High Commissioner to Mauritius) relived his global experience while narrating his ‘sojourn’ in various European countries and emphasized that we all are diasoras – be it through internal or external migration. To decide it, it depends where we put the dateline and from where we begin. He highlighted the conflict between identity and integration and said that identity was a self-defense mechanism for the self-preservation for communities. He said that the strength of the diaspora lies in its ability to accommodate, which decides their success. The reason, according to him, for the success of Indian Diaspora was its ability to accommodate. He said that Indian Ocean from millennium has been a natural engine of growth for the movement of people as it provided natural wind for the movement of ships alone the Indian coast and that the monsoon currents were most predictable and dependable for people to move along the coast.

Mudgal further added that pluralism was India’s strength, which provides an opportunity for the positive integration of people both with the host and home country. He said the role of Indian IT professionals in fixing the Y2K Millennium bug was the hallmark and turning point in the recognition of Indian knowledge industry. Underlining the other hallmark of Indian diaspora, he said that Indians are not seen as a threat and an intimidating force and are globally seen as the most accommodative. This perception of English-speaking people who are good at math, science and engineering subjects has gone a long way in carving a niche for the Indian community overseas, he said.

Prof. Binod Khadria, an eminent scholar in the area of migration, delved upon various issues plaguing the migration and disapora studies. He highlighted the contentious issues and politics behind the Global Commission for International Migration. He said that according to 2017 UN Report, some 215 million people, forming 3 per cent of the global population are migrants. Earlier it was the Europe, which was home to the largest number of the migrants, now it’s the Asia, which for the first time has become home for largest number of migrants, in India alone there is 5 million migrants. He said that while diaspora is not a benign term, the term migration has become a hot potato and dangerous term in international politics. He highlighted the issues of Syrian refugees, the Brexit, Catalonia referendum, raising of a wall on the US-Mexico border, Rohingya issue, travel ban by the US to some of the Muslim countries, the NRC in Assam, which are migration related and have assumed political significance. He said that while migration is a flow concept, diaspora is a stop concept.

The plenary session of lively interaction between academia and scholars was followed by a four sessions of book releases and discussion during the daylong workshop. On the occasion, GRFDT also announced its next international conference, which would be held in November 2020.

At the end of the plenary session, Dr M Mahalingam proposed a vote of thanks and send out invitation for the international conference to be held in November 2020.
A Report by Vijay Soni, GRFDT

India Education Diary Bureau Admin Jun 12, 2021
Australia’s child mental health system is buckling under the strain of current demand and the effect will be…

As member of global university alliance, U of T supports call for G7…

Astronomers spot a ‘blinking giant’ near the centre of the Galaxy

Govt’s intention is holistic development of every district: Rohit…