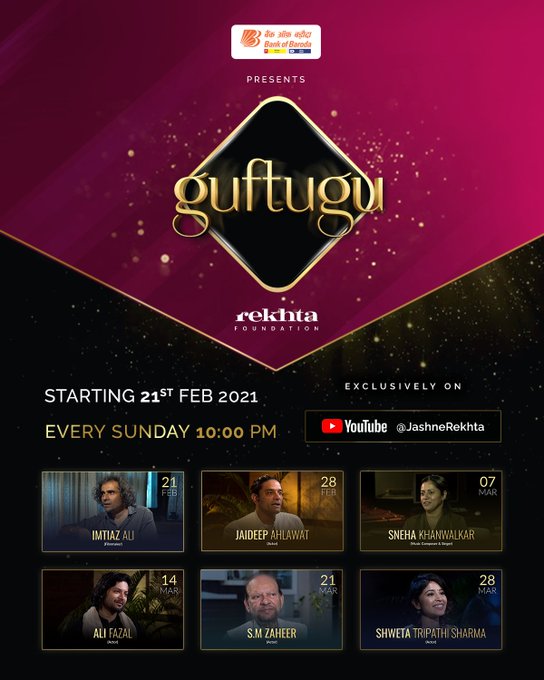 ‘Guftugu’ to continue the Art of Unhurried Interviews

New Delhi: The longest running personality based talk show ‘Guftugu’ is all set to return on a new screen with its exclusive premiere on Rekhta Foundation’s YouTube channel @jashnerekhtaofficial from 21st February 2021 onwards, with new episode to be streamed every Sunday at 10pm.

Hosted by Syed Md Irfan, Guftugu is India`s only uninterrupted, unscripted and unhurried show has been popularly known for in-depth interviews with celebrated personalities from various fields of cinema, literature, arts & culture.

The conversations at Guftugu provide the viewers an intimate look in the inner worlds of the guests invited to the show. The show focuses on the life experiences, emotional conflicts, inspirations and struggles that brought out the artist in them and shaped the way they perceive the world. Syed Mohd Irfan to continue with his distinctive style of conversation that has been the essence of the show, which lets the artistes express their raw emotions.

Syed Mohd Irfan – Anchor/Host, Guftugu expresses, “It has been a long and satisfying journey on TV and I am equally excited for starting a new voyage on OTT platform with Rekhta Foundation. Guftugu show was never just another talk show but an archiver of unheard life experiences shared by the celebrities – the real personalities of the people have been reflected in each interaction. After 9years long stint on TV, the show couldn’t have found a better home than Rekhta Foundation which is known for promotion & preservation of Hindustani language, literature, art & culture. We have ensured that the essence of the show remains intact, and the expectations of the viewers are met. Guftugu will continue to bring out the untouched side and untold stories of celebrities.”

The show is known for its unconventional approach that allows the guests with enough time to pour their heart out voraciously, at the same time covering a variety of their life aspects. Guftugu gives the viewers an opportunity to know the celebrity closely as a person and the challenges they face in their working environment, not in a superficial way of facts but with great details and reasons behind. Every interview will be much more enlightening and satisfying.

The new episodes of Guftugu would interview luminaries from a variety of fields related to art and culture. Some of the celebrities being featured are Imtiaz Ali (Filmmaker), Shweta Tripathi (Actor), Jaideep Ahlawat (Actor), Ali Fazal (Actor), S M Zaheer (Actor) and Sneha Khanwalkar (Music Composer), Ustaad Shujaat Husain Khan (Musician) amongst others.

“With the launch of Guftugu, Rekhta Foundation forays into the productions and further plans to produce web series, biopics, documentaries & more. We would soon have a series of shows promoting language, art, culture and literature. We are streamlining our resources towards developing Rekhta Productions into a first of its kind OTT platform. Inside Rekhta Studio, established and new artistes are busy creating brilliant content that will enthrall the Rekhta audience for generations. We will collaborate with artistes representing all celebrated art forms and have already started producing poetry, Dastangoi (story telling) and Ghazal programs at the studio to be broadcasted soon through Rekhta’s Digital Network. We want to provide a platform for global reach to the best of art.” apprises Mr. Satish Gupta, Head – Programs & Outreach, Rekhta Foundation.

iednewsdesk Jan 22, 2022
Researchers at the University of Southampton have explored how the pandemic has impacted the shopping habits and…