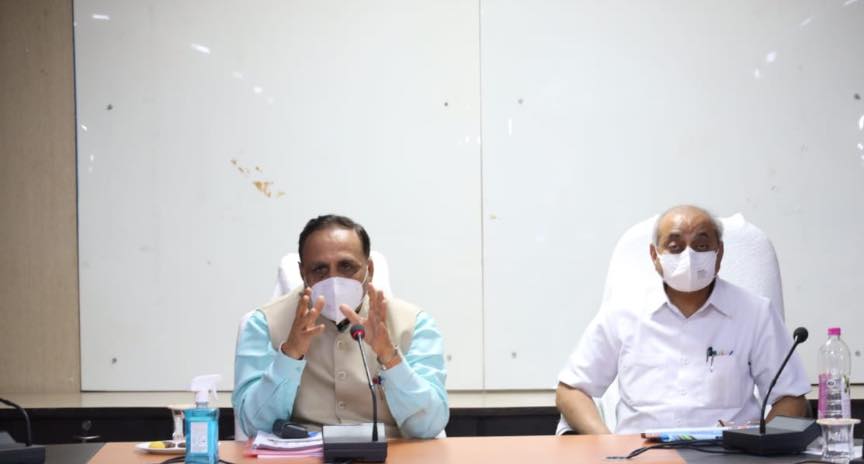 Ever since the incidence of the deadly virus has increased in the city, he said that four senior Secretaries led by Principal Health Secretary are camping here. He himself has also been regularly taking stock of the situation from Gandhinagar through videoconferencing and issuing necessary directions.

Giving details of the important steps being taken at the high-level meeting, Mr. Rupani and Mr. Patel said that Gujarat Government will grant Rs.100 crore to under-construction 800-bed Kidney Hospital and 600-bed Stemcell Hospital being converted into a Dedicated Covid Hospital. He directed the authorities concerned to ready the Stemcell Hospital within 8-10 days, and the Kidney Hospital in a month.

Mr. Rupani announced on the spot additional 200 ventilators for Surat and ordered they should reach the city by Sunday.

Since the incidence has increased in industrial units, he said the government could allow particularly textiles and diamond units function only if they strictly implement social distancing norms. The Health Minister and district-level officers will hold a separate meeting with them for compliance.

Mr. Rupani said that while over 145 Dhanvantari Raths are regularly taking preventive healthcare of 12,000 to 15,000 people at about 500 camps like administering medicines, 30 more Dhanvantari Raths would be put into service in the rural areas. Persons found with symptoms are send to referral hospitals for testing and more intensive healthcare. Arrangement has been made to let patients having no phones to talk to their relatives from phone counters or health workers’ mobile phones.

He said the protocol of social distancing, wearing masks, sanitizing and washing hands frequently is highly recommended for all the people, all the time, since the battle is likely to continue for a longer time. He directed the authorities to increase surveillance.