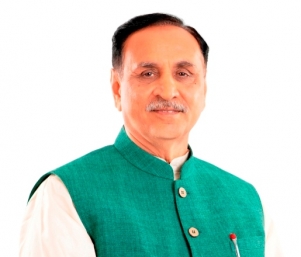 Gandhinagar: Gujarat Chief Minister Vijay Rupani will perform the ground-breaking ceremony of Rs. 711 crore Tapi-Karjan Link Pipeline Project near Umarpada in the Surat district — in an engineering feat — to lift water by 53 storeys across hilly terrain to serve the remote tribal areas on December 5, 2020.

This project on completion is expected to irrigate 53,700 acres of land in total 73 villages, including 51 villages of Umarpada taluka in Surat district and 22 villages of Dediapada taluka in Narmada district. It will also provide drinking water to these villages, and fill up 100 existing checkdams and three new big checkdams to be built at a cost of Rs 2.76 crore.

The project entails drawing 500 cusec water from Ukai reservoir near Satkashi village on the right bank of River Tapi with the help of four pumping stations up to Gondaliya village.

He will also perform the ground breaking ceremony of new Sainik School building at Bilvan village in Umarpada taluka in Surat district, in southern Gujarat, to be built at a cost of Rs.37.42 crore. This will be Gujarat’s second Sanik School in tribal areas, the other one being at Shamlaji in northern Gujarat, for bright students from the nearby region.

This Sainik School to be built on a 20 acre complex will have, besides well equipped school, students hostel for 700, staff quarters, sports complex and playgrounds.

It has been a priority of the Gujarat Government to provide irrigation facilities in predominantly tribal and rural areas.

“IISF educates present generation about how India has been an inspiration for the world for new thoughts, ideas, and innovations over centuries.This effort will fuel India’s drive towards becoming a Vishwa-Guru”, Dr. Harsh Vardhan