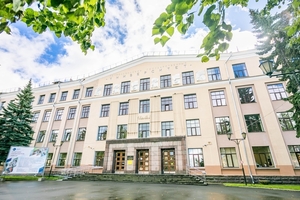 Representatives of the Laboratory of Linguistic Studies and Linguistic Ecology took part in the conference “Korablevskie readings”, organized by the Pudozh Museum of History and Local Lore.
The museum and conference are named after Alexander Korablev (1906-1981), a teacher of history, geography, and local history. For many years, Alexander Fedotovich collected items on the history and culture of Pudozh. In 1960, on the basis of his collection, a museum was created, which in 1997 was named after the founder.

Since 2005, the museum has been holding Korable Readings, a scientific conference aimed at preserving and popularizing the historical and cultural heritage of the Pudozh region. This year the readings were dedicated to the 160th anniversary of the first expedition of the collector of folklore P.N. Rybnikov to the Pudozh district.

The conference participants were researchers of oral folklore and dialect speech – Pudozh teachers and schoolchildren, employees of the Museum of History and Local Lore, Petrozavodsk State University, the Karelian Scientific Center of the Russian Academy of Sciences, local historians, as well as the descendants of Pudozh storytellers, authors of modern folklore works.

The conference was attended by representatives of the PetrSU Laboratory of Linguistic Studies and Linguistic Ecology – Senior Lecturer of the Department of Russian Language E.R. Guseva and T.A. Romankova, soloist of the Russian song choir “Pitaritsa” of the Center for Folk Art and Cultural Initiatives, with which the laboratory has been cooperating for several years.

Elena Rafkhatovna’s report was dedicated to the 2013 expedition to the Pudozh region and the experience of working with the informant Maria Modestovna Sakatarova, the bearer of the Pudozh folk culture. Maria Modestovna showed the expedition members a notebook in which she wrote down proverbs, sayings, ditties, songs and parables that were preserved in her family. Prepared for publication by E.R. Goose’s recording of folklore texts with explanations of dialect words, grammatical forms, etc. will be included in the collection on the results of the conference “Korablevskie readings”.

Tatiana Alexandrovna Romankova presented her own poems “Pudoga” and “I remember our house by the river”. The laboratory expresses its gratitude to the project “Media volunteers of PetrSU” and personally Alena Shaforostova for the video recording of the poems.

TED Junior conference at the Institute of Foreign Languages

iednewsdesk Jan 21, 2022
A “nanoPCR” technology was developed for the point-of-care (POC) diagnosis of coronavirus disease-19 (COVID-19).…