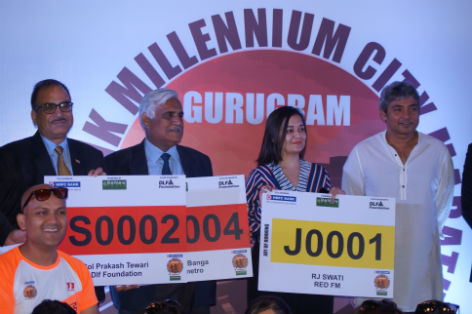 Gurgaon : Tobono Sports and Events announced the launch of the third edition of HDFC Millennium City Marathon at The Westin, Gurgaon. The marathon will be held on 29th October in collaboration with DLF Foundation.
A brainchild of Ultraman and 2 times Ironman Triathlete Abhishek Mishra, the event is expected to witness the participation of large number of corporates in four categories of races namely the Full Marathon, Half Marathon, Speed Challenge and the Joy of Running. The marathon was announced by Abhishek Mishra along with former Indian cricketer Ajay Jadeja.

Abhishek Mishra quit the corporate career three years ago to focus on endurance race events. He is among the few Indians to have earned the title of Ultraman besides model and actor Milind Soman, Kaustubh Radkar and Prithviraj Patil from Maharashtra.

ULTRAMAN and 2 times IRONMAN Triathlete Abhishek Mishra said, “I am delighted that last 2 editions of MCM was huge success. For me it is a personal mission fulfilled, that we are able to introduce a community run in the city which is developing to become a millennium city and running-friendly. Millennium City Marathon is an initiative to bring the diverse people of Gurugram on a platform of health, create awareness about the importance of fitness, and above all, to feel a part of the same city that is home to all of us.”

“DLF Foundation firmly believes in the cause of a healthy and disease -free Gurgaon. In today’s sedentary lifestyle, health has taken a backseat for all of us. Such marathons play an instrumental role in making people aware towards health,” said Colonel Prakash Tewari, Executive Director, DLF Foundation.

This mega running event is going to be a one-of-its-kind opportunity for tourists, runners and locals to explore Gurugram, and reap the personal benefit of a fit and healthy lifestyle.