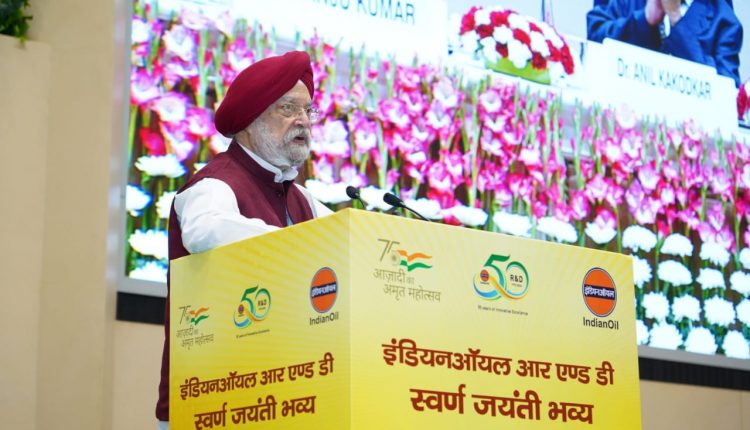 On the occasion, a special commemorative postal MyStamp was released. An innovative solar cooktop – Surya Nutan – was also launched on the occasion. Citation of 1501 patents of IOC R&D, was unveiled. The Minister also spoke to the beneficiaries of solar cooktop about their experiences of the new product. The Minister gave away prizes to the winners of Indianoil R&D Golden Jubilee National Essay Competition in which over 1500 entries were received.

Speaking on the occasion, Shri Hardeep S Puri said that 50 years of pioneering research to make energy secure and accessible in India is truly an enormous achievement. He said that recognised as the apex organisation for research and innovation in the sector, IOC R&D has transcended to the gold standard for industry innovation.

The Minister said that IOCL R&D has had glittering success in developing consumer-focused products such as high-performance fuel, mini-LPG cylinders, world-class automobile lubricants, automation of retail outlets, and LPG distributorships. It is also developing innovative technologies for the mass rollout of Biofuels, EVs, FCEVs and Green Hydrogen – the future of India’s energy security paradigm.

Talking about the solar cooktop launched today, Shri Puri said that it could be a path-breaking innovation for the average Indian consumer. Urging the IOCL to popularize it on a large scale in reasonable period of time, he said that this could bring empowerment to millions of households, especially to women.

Lauding the IOCL R&D for developing and commercialising 53 indigenous technologies and new products, and filing more than 1,500 patents in that process in the last ten years alone, the Minister wondered how many Fortune 500 companies—or for that matter, even research institutions—produce such high-quality output in their field. He said that this Golden Jubilee is not just a celebration of the sustained success of IOCL R&D, but also of its increasing relevance in the Indian innovation ecosystem.

Shri Puri said that India today is considered a global hub of scientific research. “However, we need to be doing much more to achieve our national and global targets. We need to continue to ramp up our scientific research to accomplish a technological breakthrough that could fast-track our economic growth. I believe that cutting-edge R&D—which aims to produce equitable, sustainable and large-scale innovations—will be at the forefront of change in the coming years, particularly in dynamic areas such as the energy sector.”

Urging IOCL R&D and all industry leaders to take the next leap and commit resources to building a thriving R&D ecosystem in India’s energy sector, Shri Puri said that India is undergoing a period of transition in the energy sector where India is trying to become energy-secure even as it moves towards renewable energy. This period of transition is an opportunity as much as an imperative. He said that the opportunity lies in imagining the scale of the pivot. 6 crore people visit petrol pumps every day. More than 30 crore households use LPG or other fuels to serve their cooking needs. This is a gigantic canvass to explore not just newer technologies, but also improve business processes and reduce carbon footprint, the Minister added.

On India’s capabilities as a hub for scientific research and innovation, Shri Puri said that India’s innovation and entrepreneurial story has seen a remarkable growth under the progressive policies of the Modi Government. 28,000 patents were granted last year against 4,000 patents in 2014; 2.5 lakh trademarks were registered in 2020-21 as compared to 70,000 trademarks in 2013-14; Last year saw 42 start-ups reach unicorn status- before 2014, the average was one unicorn a year. He said that this has been made possible because of visionary policies of the Modi Government, including ‘Made in India’, ‘Startup India’, ‘Atal Innovation Mission’, and incentivisation of multi-disciplinary research areas such as drones.

Speaking on the occasion, Shri Teli said that IndianOil R&D has made a mark for itself, by its daunting efforts and accomplishments. He said they are working to make India aatamnirbhar, by developing low-cost, environmentally-benign and customer-friendly solutions and products. He called them to play a meaningful role in achieving the Prime Minister’s vision of $5 Trillion economy in shortest possible time.

Established in 1972 to cater to the defence requirement of the country, IndianOil R&D has now emerged as a world-class technology solution provider and contributed to the vision of an ‘Aatmanirbhar Bharat’. IndianOil’s cutting-edge Research & Development Centre is one of Asia’s finest in downstream petroleum research, development and commercial deployment. IndianOil R&D has been developing world-class technologies, refining process solutions and innovative products. With five decades of pioneering research work in lubricants, refining processes, pipeline transportation and catalysts, IndianOil’s basket of technologies covers domains of Petrochemicals, Nanotechnology, green fuels such as biofuels, Hydrogen &Hydrogen-CNG, solar energy, energy storage devices, batteries and carbon capture & utilization.

To further expand its research & innovation footprint, IndianOil is coming up with a new Technology Development and Deployment Centre, which will transform the energy landscape of the country. It will be the largest and most sustainable Net Zero R&D campus globally. With a focus on Technology Demonstration & Commercialization, it will be equipped with four Centres of Excellence in Alternative & Renewable Energy, Corrosion Research, Nanotechnology, and Synthetic Biology.

University of Johannesburg: Freedom’s just another word for nothing left to lose… and without proper infrastructure, freedom means little