Scientists at Tokyo Institute of Technology (Tokyo Tech) have designed a novel catalyst for the Suzuki cross-coupling reaction, which is widely used in the synthesis of industrial and pharmaceutical organic chemicals. Their strategy of loading an intermetallic Pd compound onto a support sharing the same element yields a stable and cost-effective catalyst that outperforms commercially available alternatives.

The Suzuki cross-coupling reaction is a widely used technique for combining organic compounds and synthesizing complex chemicals for industrial or pharmaceutical applications. The process requires the use of palladium (Pd) catalysts and, as of today, two main types of Pd-based materials are used in practice as heterogeneous catalysts.

The first is ‘metal-loaded catalysts’, which consist of Pd atoms (active sites) loaded onto inert supports made of oxides or carbon-based materials. They are easy to prepare and offer a large surface area with active sites where the Suzuki reaction can happen. However, these catalysts degrade quickly with use as the active sites aggregate/detach from the support. The second type is ‘intermetallic catalysts’—molecules made of Pd and another metal. Though much more stable and effective under mild conditions, these catalysts make poor use of the high quantities of Pd required because few active sites actually end up exposed to the reaction medium. But what if both types of catalyst were combined to overcome their inherent limitations?

In a recent study published in ACS Catalysis, a team of scientists from Tokyo Tech, Japan, came up with a new idea for a heterogeneous catalyst. They chose nanoporous zirconium carbide (ZrC) as the support on which they grew ZrPd3 nanoparticles, which act as an intermetallic catalyst. Because both the support and the active compound have the same element (Zr), the chemical preparation of the catalyst is remarkably simple. The overall benefits, moreover, go far beyond that.

First, the new Pd–ZrC catalyst is highly stable because active sites (ZrPd3) get anchored on the nanoporous ZrC support. This strong interaction between ZrPd3 and ZrC helps enhance the overall catalytic stability, enabling re-use of the Pd–ZrC catalyst for more than 15 cycles. In addition, the Pd sites exposed do not clump together and disperse throughout the support, realizing a much larger effective area than intermetallic catalysts alone. The neat distribution of ZrPd3 over the surface of the support also means that a smaller amount of palladium is needed for the same number of active sites compared with other intermetallic catalysts—a measure referred to as Pd atom economy.

Perhaps most important is the fact that these benefits come with no strings attached; the actual performance, i.e. turnover frequency, of the new catalyst is higher than that of commercially available compounds. Professor Hideo Hosono, who led the study, explains: “Because the Pd–ZrC has both negatively charged Pd and a strong electron-donation ability, our catalyst achieved high catalytic performance for the Suzuki cross-coupling reaction even at room temperature.”

Overall, the results of both the theoretical and experimental analyses conducted by the team of scientists confirm that their strategy is very promising for the development of future catalysts, as Prof Hosono remarks: “Our observations have proved the effectiveness of combining intermetallic catalysts with supports to improve upon multiple aspects simultaneously, showing that we can increase the degrees of freedom in the design of heterogeneous catalysts.”

Improving catalysts is a practical way of reducing the economic and environmental costs associated with the synthesis of complex chemicals. Only time will tell how many novel catalyst designs are inspired by the strategy adopted in this study! 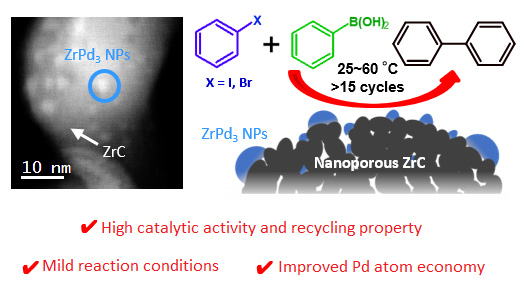 The new catalyst consists of ZrPd3 nanoparticles grown on an inert ZrC support. Its simple fabrication procedure, coupled with its many advantages over available alternatives, make the proposed catalyst an attractive option for Suzuki cross-coupling reactions.