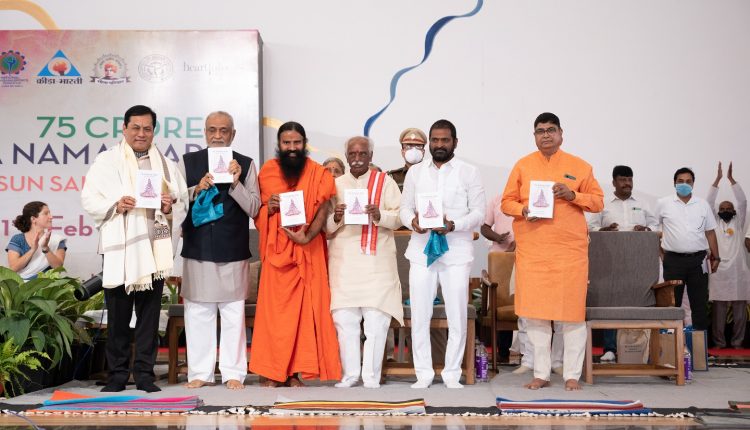 This virtual event reflected Pujya Yogrishi Swami Ramdev ji and Pujya Daaji’s idea of Unity with the intention of preserving and propagating the ancient science of yoga. The 75-crore Suryanamaskar project is also a tribute to 75 years of India’s independence. For those who can participate in the project, the yogic practice of Surya Namaskar which literally means ‘sun salutation’ is slated for 21 days for 13 times a day. The project will last from 1 January – 20 February 2022. This program is being organized by these five international organizations Heartfulness Institute, Patanjali Yogpeeth and its associated organizations, NYSF-National Yogasana Sport Federation, Geeta Parivar, and Kreeda Bharati and supported by Ministry of Ayush, Ministry of Education and Ministry of External Affairs-ICCR and sponsored by FIT India, Ministry of Youth Affairs and Sports, Govt of India. Other key collaborators are AIU – Association of Indian Universities, NSS, DAV managing committee, Allen Career Institute and Navyog Sansthan and Svyasa. The 75 crore Suryanamaskar challenge also aims at creating the largest congregational Surya Namaskar event with each participant also receiving a certificate upon completing the 21-day Suryanamaskar challenger. The website for this program is http://www.75suryanamaskar.com

With 30 Participating states, 21,814 participating institutions, 10,05,429 registered students, the number of Surya Namaskars are already slated to being at 97,25,560 and the numbers are growing! Individual/ Institution/ Volunteer registration are open. For more information, please visit: https://www.75suryanamaskar.com/ . All institutions are encouraged to participate and in case of closing down of institutions, individuals are encouraged to perform the activities at home and upload on their social media channels with hashtags of #750million_Suryanamaskar #75करोड_सूर्यनमस्कार

President of Shri Ram Chandra Mission and Global Guide of Heartfulness Daaji said, “It has been our endeavour to bring people close to their inner nature. By establishing the Heartfulness International Yoga Academy, our goal is to make the practice of yoga be within the reach of just everybody and every section of the society. The launch of The Authentic Yoga Book also is an indicator of the positivity that yoga can have on one’s body, mind, and soul. It will also serve as a litmus paper to understand where one stands in the practice of yoga and what one needs to do to achieve a holistic growth.”

Yogrishi Swami Ramdev ji Maharaj had to say, “In the past two decades more and more people around the world have become aware of the benefits of yoga. But to make yoga a part of one’s daily life in practice has not been easy. With Daaji’s book on Yoga, he provides easy-to-adopt patterns for yoga. For Heartfulness to bring in such an incredible congregation with a huge number of participants from around the world joining us at this moment is commendable. Yoga is not merely a form of exercise but is to be in alignment with the universe that is beneficial at mental and spiritual levels as well. Surya Namaskar is one asana that covers twelve other major asanas rendering holistic wellness to the practitioners. I hope more and more people adopt Surya Namaskar as part of their daily regimen.”

Shri Sarbananda Sonowal said, “Daaji has very profoundly brought the tools to master yoga in his latest book. I am sure it is going to be a handy book for many yoga seekers. It is an exhilarating experience to participate in Surya Namaskar at such a grand scale as well. The people of the world are coming together today to celebrate the goodness of yoga. It is a message to the world that fitness should be at the heart of one’s life and yoga is form of fitness that elevates one spiritually as well. With inaugurating the International Yoga Academy, Heartfulness is making the effort in the right direction by making Yoga accessible to more and more people.”

Governor Haryana Dattatreya Bandaru said, “I am happy to see the overwhelming response to mission 75 crore Suryanamaskar project. Hariyana is land of Yoga from where Geeta, the science of Yogashastra originated. We are proud that Hariyana Yog Aayog is working in the direction to take yoga until last end of the society and it is actively involved in this mission too. The book by Daaji is enlightening in this direction as well and I believe the upcoming Heartfulness International Yoga Academy is going to propel the mission in the right direction.”

Shri Srinivas Goud said, “Yoga is a sacred science passed down to us from our ancient wise men for an overall wellbeing. The Authentic Yoga Book surely suffices the need to adopt yoga as an integral part of our lives. With Heartfulness International Yoga Academy soon to offer its gamut of services on yoga, Ayurveda and therapeutic treatments, Heartfulness is taking its mission one notch higher. It’s also wonderful to see more and more people signing up for the 75-crore Suryanmaskar challenge as it is a sure sign of growing awareness and willingness for a healthy lifestyle.”

On the Book released today, The Authentic Yoga of Patanjali by P Y Deshpande, Daaji spoke “ Today, I am very happy to launch a book which I have been personally awaiting for some time. This book is called – The Authentic Yoga. This book was originally written by Shri P Y Deshpande ji in the seventies. Shri Deshpandeji had been a major literary force of his time in Maharashtra and a thinker with a radical outlook and global vision. I have read many commentaries on Yoga Sutras of great sage Patanjali but had not found anything which is as insightful as this book. As I have mentioned earlier that contrary to the common understanding of Yoga as means of improving Health, Yoga is actually an evolving science, and this book takes us deeper into the significance of yoga, helping us understand the role it can play in uplifting our lives at a physical, mental, emotional, and spiritual level.”

The Heartfulness International Yoga Academy comprises Yoga halls that can accommodate 100 Yoga students in each hall, therapeutic Yoga rooms for consultation, one to one training spaces or small group classes; pre-natal Yoga rooms; a lecture hall with a 200 sitting capacity; a full-fledged recording studio with editing suites for pre-recorded wellness programs; a recording Yoga hall fully equipped for Live online Yoga Classes; a Yoga library with books from every Yoga Institutions and access to Yoga research articles. With Heartfulness Research programs going on and collaborative Yoga research programs that have started, this is a solid place to bring the effectiveness of yoga to the scientific minds. The Academy endeavours to reach all level of the society in creating programs that are accessible to one and all with training for Health Volunteers, Asha, Angavadi, school-teachers and students as part of life-skill development. The Academy also offers Ayurvedic consultation, massage and therapeutic treatments along with dormitory to Deluxe Suite facilities.

The programs at the Yoga Academy is overseen by an international team with RYT500 Lead Yoga Trainers from India, Europe, Australia, Uzbekistan and the US and wish to extend their invitation to one and all so as to make global the true spirit of Yoga. The Heartfulness Academy (Shri Ram Chandra Mission) is registered with Yoga Certification Board as a Leading yoga Institution, with the Indian Yoga Association and with Yoga Alliance (RYS200 and RYS300). Last year 2021, Heartfulness was leading the effort for the Yoga for Unity program that was supported by Ayush, the UNDPI and reached more than 21 million people in 159 countries.

If you want to know more about the Academy: hfn.link/yogacademy

The Authentic Yoga Book has priceless nuggets for the readers:

The Authentic Yoga Book, originally written by Shri P Deshpande ji, has been penned by Daaji with his vision of making yoga instrumental in helping people of different age groups inculcate the practice daily life. The book comes as a good motivational tool for the practice so one does not procrastinate reaping the benefits early on. The easy-read and the simplicity of the book make it indispensable for all as the reader also decipher the beautify of yoga practice beautifully told by Daaji. Daaji also very dexterously dispels the myths in the book around yoga which is widely taken by people as means of physical fitness only. Rather, yoga has deeper meaning and helps in the evolution of human mind and soul to higher levels.

University of Minnesota: Shifting business to battle the coronavirus

iednewsdesk Jan 28, 2022
Four Caltech professors, along with one principal staff member from the Jet Propulsion Laboratory, have been…