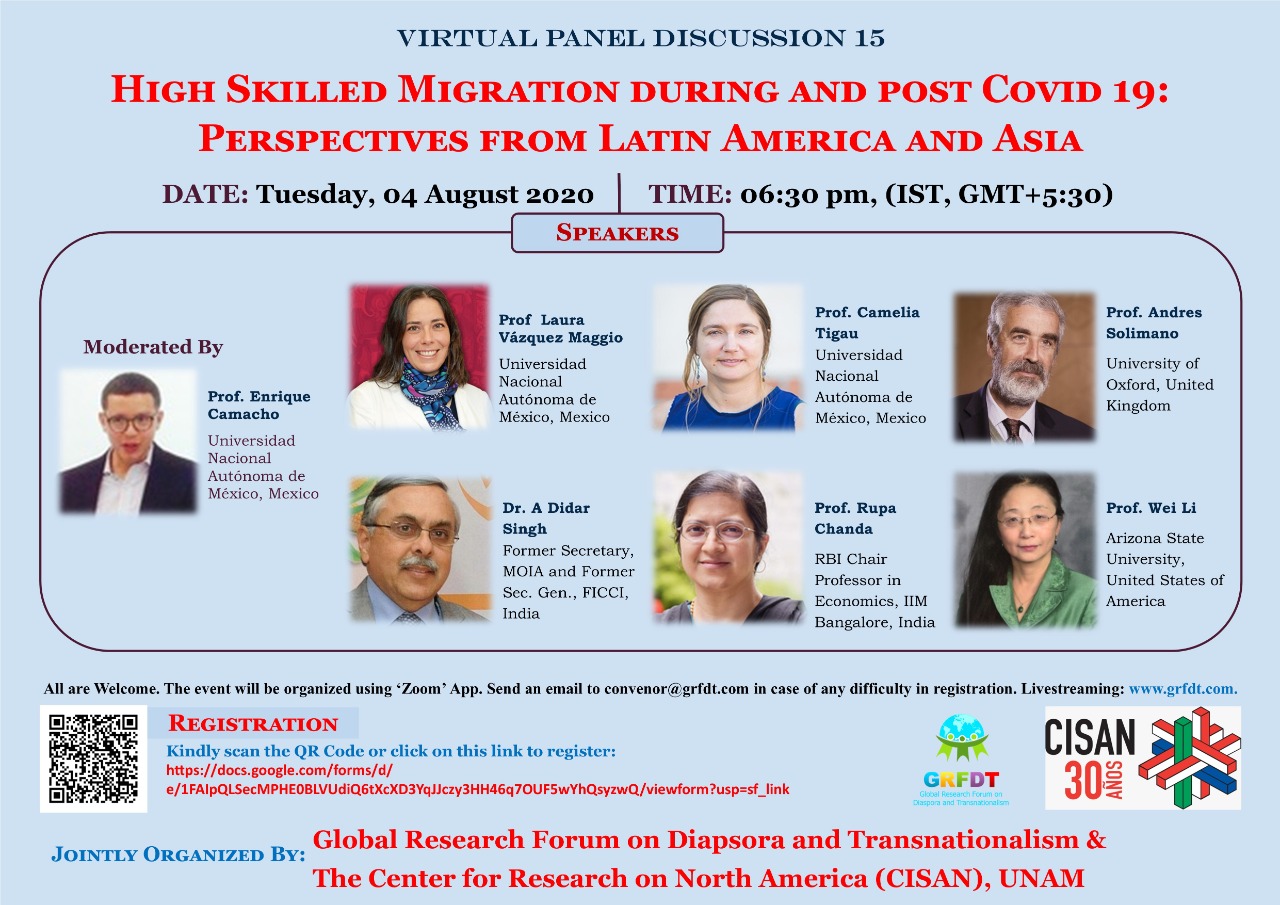 High Skilled Migration during and post COVID-19: Perspectives from Latin America and Asia

The writer is a Doctoral Candidate at the Department of History, University of Hyderabad, India. She can be reached at 17shph05@uohyd.ac.in

High skilled migrant workers have been on the forefront and accomplishing/involving themselves in various activities in the countries to which they have migrated. However, due to the COVID-19 pandemic, there has been a rampant closure of borders and collapsing of economies which has given way to a rise in the feeling of the ‘other’ towards the migrants. Therefore, this has resulted in the toughening of migration policies in numerous countries. The United States for instance, is not allowing asylum to anyone who intends on entering the US from the Mexican borders. Such a situation is leading to a rise in fabrication, stigmatization as well as discrimination/prejudice.

Global Research Forum on Diaspora and Transnationalism (GRFDT) along with The Centre for Research on North America (CISAN), UNAM organized an insightful and vital discussion on “High Skilled Migration during and post COVID-19: Perspectives from Latin America and Asia” on August 4th 2020. This session was moderated by Professor Enrique Camacho from the Universidad Nacional Autonoma de Mexico, Mexico. This 15th GRFDT virtual panel was attended by policy makers, practitioners and government officials from various countries.

Professor Laura Vazquez Maggio, Univeridad Nacional Autonoma de Mexico, Mexico spoke about the management of COVID crisis by Australia, where skilled migration has played a critical role since the last decades of the 20th century. There has been a sweeping increase in the incoming skilled migrants (permanent) to Australia from 10,000 in the mid 1980s to a 120,000 yearly in the last five year. In the year 2018, there were 112,000 skilled migrants. What’s interesting is that a large portion of these migrations happen from Latin American countries like Mexico. As per the Australian Bureau of Statistics, around 136,000 among the foreign born migrants currently residing in Australia, come from Latin American countries and out of these, around 5000 were born in Mexico who are highly skilled and probably the most educated cohort in Australia.

Tremendous help/backing has been provided by the Australian government to Australian citizens and permanent citizens. This involves large amount of money that has been allotted to fund and assist people who have lost their jobs. Adding to this, Australia has also provided tax support to individuals and businesses that are experiencing economic complexity. The government has taken charge to support companies in managing short-term cash flows so as to ensure that employers do not have to let go of their employees in such trying times.

Professor Camilia Tigau, Univeridad Nacional Autonoma de Mexico, Mexico talked about how Medicine is one of the prime occupations of skilled migrants in the USA and if we were to look at the census, there are about 10000 licensed doctors of Mexican origin in the USA. Prior to the corona virus pandemic, the understaffing of Mexican hospitals and underemployment of specialists were being talked about but it is during such emergencies that the scarcity of good quality healthcare really becomes an focal issue. Due to a governmental agreement between Mexico and Cuba, Mexico welcomed Cuban doctors during this pandemic after paying 6.2 million dollars for the services of 585 doctors. This however has faced two critiques. The first one being the conditions under which these doctors were hired and the other was associated with the discrimination against foreign workers in Mexico. Cuba is a nation where healthcare is free and universal and has the most doctors per capita in the world. She believes that focus on the issue of discrimination of Cuban doctors might distract us from more serious problems at the political level to fight the virus.

Professor Rupa Chanda, RBI Chair in Economics, IIM Bengaluru, India spoke about skilled Indian migration to developed countries from a trade and economic cooperation perspective. Professor Chanda says that looking at the migration from India to other countries and the distribution of that migration, we can notice that a huge chunk of migrants has increased threefold from 1990 to 2019. Further citing the United Nation, she said that the UN estimated this migration to be around 17.5 million. Professor Chanda goes on to give an explanation of the h-1b visa to the USA and its breakdown. India has been the leading source country for foreign countries and Indians come second in terms of nurses. She also shed light on the case of Gulf countries and Canada and highlighted that Indians represent a vast proportion of skilled workers. Off late however, there have been certain disputes in this arena, for instance the hike in visa fees in USA and in UK where there was a removal of post-study work program which eventually led to a decline in the number of students opting to study there. Even though a major portion of the remittance come from the Gulf countries to India, but then the OECD countries (Organization for Economic Co-operation and Development) also constitute around 34% of the total remittance to India. Looking at the COVID-19 scenario, there has been a further increase in the restrictions that were already on the rise (border policies) which will go on to affect international students from India.

Professor Andres Solimano, International Center for Globalization and Development (CIGLOB) in Chile focused on the impact of the global economic contraction that is taking place during the COVID-19 and the COVID-19 containment policies like restrictions, mobility, lockdown etc. According to the International Monetary Fund (IMF, the global economy should contract between 5.5-6% since we are in a huge economic contraction, for the first time since the Great Depression of 1930s. This is having a huge impact on the economies of the global North. The global South which consists of developing countries is not hit as hard as the global North (Canada, USA, Europe etc). This is mainly because China and India are keeping the positive growth and because the migration is usually from the global South to the global North. Speaking about the impact of the ongoing crisis, he said that there is nothing black and white in such a situation because several countries in Asia are recovering from this pandemic whereas India, on the other hand has shown positive growth in COVID-19 cases.

Professor Binod Khadria commented that the world is experiencing a drastic change and it’s something that we did not expect. He talked about two philosophies that originated in his part of the world (Indian subcontinent) and they are Hinduism and Buddhism and they both talked about Globalisation. He explained the meaning of the Sanskrit term ‘Vasudeva Kutumbakam’ which mean that the entire earth is one family and mankind is its citizens. COVID-19 has taken the world by surprise and however many projections one might have made, the world was just not prepared to deal with this pandemic. He talks about making a paradigm shift in our theoretical constructs as the world was not ready for something like the ongoing pandemic. We need to decide and discuss what’s more important, which one should come first- life or livelihood and this is something that we address with a new paradigm.