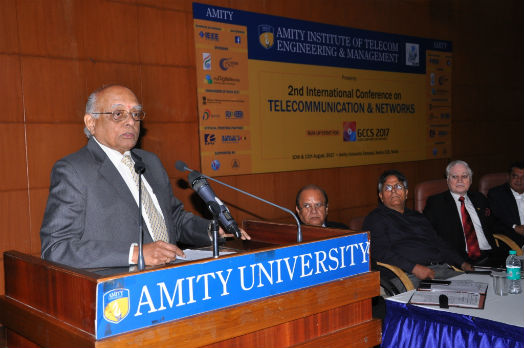 New Delhi: “National Knowledge Network (NKN) conceptualized by Government of India in 2010 has been successfully connecting educational and research Institutions in the country and is currently perceived globally as a leading research and education network (REN). A high speed data link consisting of National Knowledge Network in India and Internet2 in USA has been planned to be used for exchange of Meteorological data between ISRO (Indian Space Research Organisation) and NOAA (National Oceanic and Atmospheric Administration (USA) soon ” averred Dr. R Chidambaram, Principal Scientific Advisor, Govt. of India while sharing his views during the inauguration of second International Conference on Telecommunications and Networking (TELNET-2017) organized by Amity Institute of Telecom Engineering and Management (AITEM) at University Campus, Sector-125, Noida.
He further stated, “ the amount of data moving over Telecom networks is growing exponentially in India owing to the advances in network and telecommunication technologies, backed by corresponding advances in supercomputing and nano- electronics.” He outlined various recent developments in Telecom sector and networks which have changed the way businesses are done in the country such as use of Optical Fibre Cable, FTTH (fibre to the home), high speed and low cost Broadband and error free service etc.

TELNET 2017 is sponsored by IEEE UP section, Facebook, Science and Engineering Research Board and ECIL

Welcoming the distinguished gathering, Lt. Gen. P. D. Bhargava, Group Deputy Vice Chancellor & Advisor, AITEM and Patron TEL-NET 2017 thanked the erudite speakers and delegates across India and abroad for participating in the Conference. He stressed that the importance of telecommunications is growing day by day and is receiving immense attention in the scientific and industrial community at national and global level. He stated that the present scenario and the future growth potential in Telecom sector pose challenges as well as opportunities. There is lot of scope for the technological innovation in the equipment and networking design, operation and maintenance practices and network security poses a great challenge. He expressed his hope that during the two day Conference all the challenges and opportunities existing in Telecom sector will be discussed and deliberated upon by national and international experts.

Addressing the gathering, Mr. Munish Seth, Regional Head, APAC, Connectivity Solutions, Facebook complemented Amity for organizing the event and starting the incubation of new thoughts and leadership. Sharing important statistics about Indian Telecom Sector, he said that during past few months, there have been giant strides in the field of data usage due to the competition between Airtel and JIO. At present, there are about 450 million internet users and billion plus on voice, which is a great initiative by Telcos to connect people. He stressed that the 50% of the people who are not on Internet come from rural India and if India has to progress, pervasive solution needs to evolved to bring those people on Internet. He listed out “Awareness”, “Infrastructure and Affordability” as three barriers for achieving inclusive growth in India. He opined that unless and until companies like Facebook, which call themselves as Techno start –ups, catalyze some of the disruptions in the market in terms of infrastructure and affordability, awareness will always be a challenge. Affordability comes in two prongs- affordability to the consumers and affordability to network operators. He stressed that the world is moving towards data; Whats app and Facebook have become all pervasive and that’s where we need to be more competitive. He called upon the youth to “move fast and break things; do not wait for perfection and if they have a great idea, bring on the entrepreneurship spirit and build it up”

Sharing his views, Dr. Ashok K Chauhan- Founder President, Amity Group stated that Telecom Industry has a great future in India and abroad, there may be cycles of ups and downs but in long run, it is bound to come up strong. He stressed that Seminars and Conferences at Amity are different since they are organized keeping in mind their potential outcome in the form of collaborations, joint research and publications, student and faculty exchanges which are likely to benefit both the Institutions. He congratulated AITEM for organizing Conference on such a relevant topic and for inviting a galaxy of experts to dwell on the same.

Expressing his views, Mr. Anil Kaushal, Member , TRAI stated that Telecommunication is one of the most successful sector after independence and the growth and success of this sector, to some extent, can be attributed to proper regulatory framework and policies of TRAI. Talking about the way forward he stated that, TRAI is very soon coming up with recommendations on IOT, Cloud Computing, Green telecommunication, Ease of doing Business to ensure further growth of Telecom Network.

Telecommunications being an emerging area, TELNET-2017 witnessed a huge response from India and abroad. Conference received a total of 380 research papers and about 106 papers are accepted for technical presentation. Researchers from 22 states of our country are participating in the conference. Technical program comprises of Keynote Talks in plenary sessions, technical paper sessions on important topics like network knowledge maps, radiofrequency miniaturized devices, 5G technologies, smart spectrums and a Tutorial on Software Stability Model.