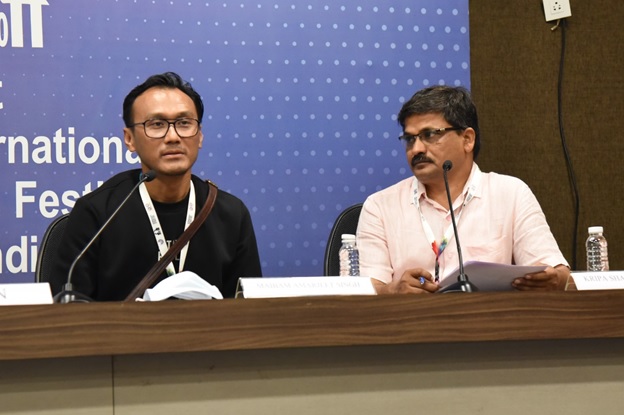 New Delhi: Films Division’s 52-minute documentary made by Amarjeet Singh Maibam, , tracks the journey of a group of truckers as they manoeuvre through perilous highways, risking their lives, ferrying essential commodities to serve the people of Manipur. The film has been chosen at the 51st International Film Festival of India under the Indian Panorama Non-feature Films.

“It is an interactive film on the highways of North East India. I started filming the documentary in 2014 and continued till 2017 so that I could capture the moments live in camera. I was able to complete it in 2018 with the final touches and patch works to it,” said Maibam while addressing a press conference at IFFI, in Panaji today, 24th January 2021. The documentary was screened at IFFI yesterday.

National Highway 2 and 37 which are considered as the lifelines of Manipur connects the landlocked state to the rest of the world. The documentary which has been made over a period of five years picturizes the economic blockades, strikes, extortion and bad road conditions that make the highways a life-threatening terrain for truckers.

“I could have finished this film even within one month with just giving voice-over. But I was waiting for the right moment to capture the reality. I followed the characters who are truckers from 2014 to 2018 and travelled with them,” he added.

Speaking about the film he said that the documentary is set against the backdrop of two protests in Manipur. “One is Inner Line Permit and another is District bifurcation Of Manipur,” he stated.

Speaking about the experience of screening the film at IFFI screens, he said that there was a good response from the audience but it was suggested that the film should have been be a little longer. “After watching the film, I also felt the same. The film lacks a breathing space and the documentary goes on a fast pace”, he added.

He also thanked Films Division, who produced this film. “I would like to thank Films Division for believing in me and also producing the film. My friend, Kiran, was supporting me until Films Division came into the picture. I am thankful to both,” he added.

Speaking about documenting the film amid risky environment he said that, “I was arrested several times during the making of this documentary. Whenever there was a protest I used to reach the spot immediately with my camera for real footage. They even confiscated my camera and deleted all my footage on a particular day. But it gave me confidence to go on with the project.”

He went on to say that, “An army man should never be afraid of the war”. He pointed out that the profession of film making demands taking such risks and the film maker should not have a second thought about it. He also mentioned that his parents were very cooperative and never stopped him from following his dream.

The film is an indexical of the unfavorable manmade predicaments the people of Manipur are currently facing, narrated through the daily difficulties faced by a trucker in the national highways that connect Manipur.

Amarjeet Singh Maibam has directed and shot many fiction and non-fiction for Doordarshan. His independent documentary films include ‘City of Victims’, ‘My Generous Village’, and (co-directed) ‘Nawa – Spirit of Atey’.

IFFI 51 has conquered all ifs and buts to ensure bonding and closeness between us human beings: Union Minister Babul Supriyo