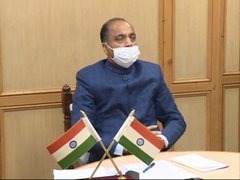 Shimla: Chief Minister Jai Ram Thakur has urged Prime Minister Narendra Modi for bringing a special ordinance by the Union Government to provide financial assistance to the unorganized and other workers, so that the funds available with the Building and Other Workers Welfare Board can also be used for their welfare.

In a letter to the Prime Minister in this context, the Chief Minister said that about Rs. 582 crore is available with the Himachal Pradesh Building and Construction Welfare Board. He said that the number of migrant and unorganized workers in the state is very high and in view of the economic condition of the state government, a lack is being felt to provide help to poor labourers.

The Chief Minister said that under the Building and Other Construction Workers Act, 1996 and Cess Act, there is a provision to use this amount for the welfare of buildings and other workers. But it can only be used for registered workers, which is also the order of Supreme Court.

Jai Ram Thakur said that the state government has provided minimum wages and basic services to the workers of industrial and all other sectors of the state. He said that the state government has sanctioned Rs. two thousand to the registered building and construction workers from the Building and Construction Workers Welfare Fund for the month of March and April and this amount is being transferred directly to their bank accounts.