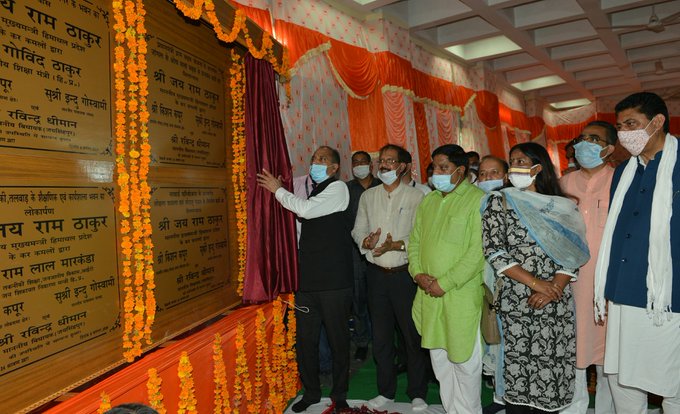 While addressing the people of the area on the occasion, Chief Minister said that the Covid-19 pandemic has forced the State Government to perform inauguration and foundation stone laying ceremony virtually. He said that developmental projects worth Rs. 130 crore were dedicated by him today to the people of Jaisinghpur Vidhan Sabha area.

Jai Ram Thakur said that on the request of the State Government, the Union Government has approved investment clearance of about Rs. 7922 crore for six projects of Irrigation, Multipurpose and flood control schemes for the State. He said that this include Renuka ji Dam Project (National Project) with an estimated cost of Rs. 6947 crores and five proposals related to flood protection works/anti-erosion measures with estimated cost of Rs. 975.70 crore.

Local MLA Ravinder Dhiman while welcoming the Chief Minister to his home constituency thanked him for dedicating developmental projects worth crores of Rupees in the area. He thanked the Chief Minister for laying foundation stones of five projects worth Rs. 57 crore under the Jal Jeevan Mission. He also detailed various developmental demands of the area.

Applications for Kingston University’s Business Management programme in India for…

India Education Diary Bureau Admin Mar 9, 2021
New Delhi: The New Delhi-based Indian School of Business and Finance (ISBF) has announced that the first round of…