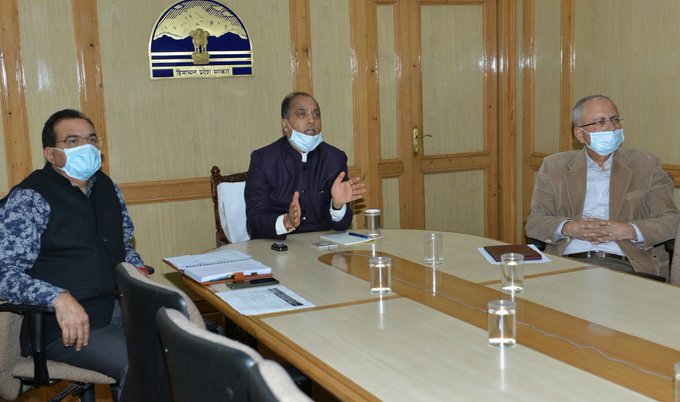 Shimla: Effective data-base of beneficiaries of various central and state schemes must be compiled and made available at a click of a button, stated Chief Minister Jai Ram Thakur while addressing the Deputy Commissioners, SDMs and BDOs of the state through video conferencing from here today.

Jai Ram Thakur said that the data so compiled must have complete address of beneficiary, his/her father’s name and mobile number etc. He said that the data compiled would have to be placed before the Gram Sabha meeting once in a year. The concerned SDMs should hold meeting with all the respective departments at sub divisional level and retrieve the data on click of button.

He said that Panchayat Secretaries being grass root functionaries should also coordinate with various departments at panchayat level so that data could also be prepared at the panchayat level itself. This would facilitate the state government in virtually interacting the beneficiaries of various schemes during this Covid-19 pandemic when actual interaction was not possible.

Jai Ram Thakur said that regular monitoring of data must be done so as to avoid any gap in data compiled and also to weed out wrong entries. He said that this would ensure that fruits of schemes reach to the deserving persons.

Chief Secretary Anil Khachi assured the Chief Minister that compilation of data would be completed within the stipulated period.

Advisor to the Chief Minister Dr. R.N. Batta said that sample proforma would be provided to the officers to facilitate compilation of data.