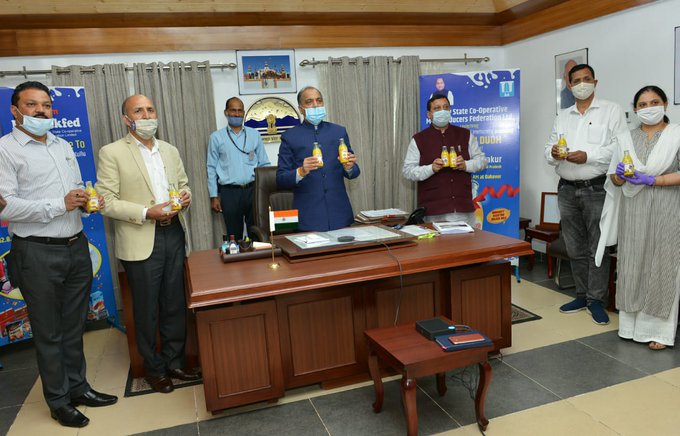 Shimla: Chief Minister Jai Ram Thakur today launched Nutritional Immunity Boosting ‘Him Haldi Dudh(Turmeric Latte)’ manufactured by MILKFED and also distributed incentive to the Milk Producers of Mandi, Shimla and Kullu district under the National Programme for Diary Development and also interacted with them through video conference from Shimla today.

Speaking on the occasion, Chief Minister said that the Him Haldi Dudh(Turmeric Latte) has been developed by the Bio Technology Department of Punjabi University Patiala and the same has been patented. He said that this drink is a Detox drink which has anti-hangover, anti-oxidant, anti-inflammatory and immunity booster contents in it. He expressed hope that this drink would become popular amongst the masses.

Jai Ram Thakur said that under the National Diary Development Programme MILKFED has today transferred Rs 2000 into the accounts of 835 milk producers as incentive amount and also 5 litre stainless steel buckets to 1000 mill producers for collection and transportation of milk for marketing. He said that MILKFED today has transferred Rs 16.70lakh into the accounts of the milk producers.

Jai Ram Thakur expressed happiness that the annual turnover of the MILKFED was Rs 132 crore in the year 2019-20, which was 33 percent more than the previous years turnover. He said that even in the Covid pandemic, the MILKFED did not stop its activities and procured milk from the farmers. He said that the Diary development activities provided much needed boost to the rural economy during this pandemic.

Rural Development, Agriculture and Animal Husbandry Minister Virender Kanwar said that five percent commission was being provided to Milk Cooperative Societies in the State. He said that presently the MILKFED was collecting 1.24 lakh litre milk per day.