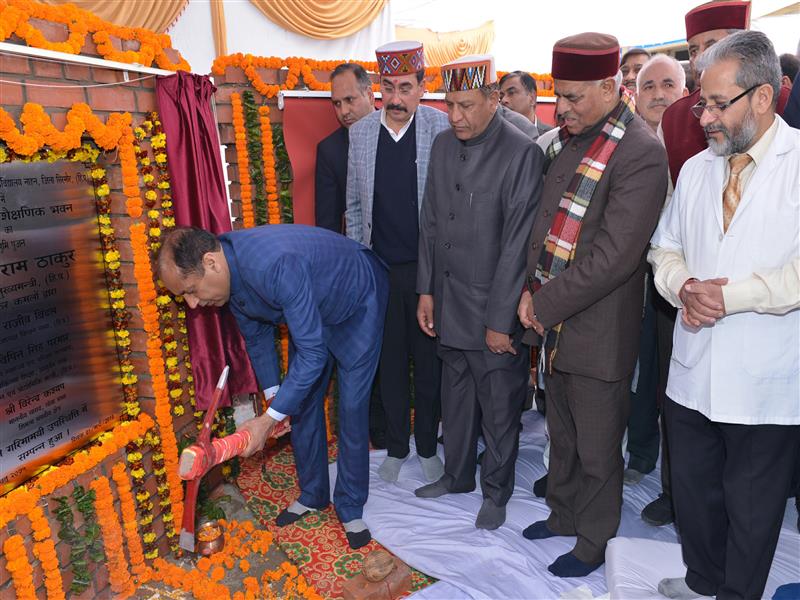 Speaking on the occasion, the Chief Minister said that this complex would be completed within the next two years and world class facilities would be ensured to the students of this college. This college would also provide specialised health care facilities to the patients of the region. He said renal dialysis and ortho facilities and separate special wards for TB patients would also be made avaiable in this medical college.

The Chief Minister said that the State has six medical colleges in government sector besides one private medical college. Apart from this, the Union government has sanctioned AIIMS for the State which was coming up at a cost of Rs. 1300 crore in Bilaspur district. He said that now the need was to strengthen existing health institutions. The Union Government has launched Ayushmann Bharat scheme which was the world’s largest health scheme covering about 50 crore people of the country. He said that the state government has started HimCare scheme to provide health cover to all those families that have not been covered under the Ayushmann Bharat Scheme.

He said that the Nation was safe in the hands of strong and able leadership of Prime Minister Narendra Modi. He said that the country was fully capable to give befitting reply to Pakistan and terrorists backed by it. The Nation gave a befitting reply to the recent Pulwama terrorist attack by destroying terrorist camps being run in POK. It was due to the strong central leadership that today Pakistan stands isolated. He urged the people to strengthen the hands of Shri Modi so that the pace of development in the country goes uninterrupted.

Earlier, the Chief Minister laid foundation stone of parking near Nahan bus stand and renovation work of HRTC bus stand to be completed by spending an amount of Rs. 6 crore. He laid foundation stone of nature park to be constructed at a cost Rs 1.50 crore. He also planted a sapling of ‘Rudraksh’ in the proposed nature park. He said the nature park would not only ensure conservation of the forest but also provide best recreational facilities to the people of Nahan town. The park would have several facilities like amphitheater, cycling tracks, kids zone and fragrance garden etc.

Several social, cultural and political organisations honoured the Chief Minister of the occasion.

Speaker, State Vidhan Sabha Dr. Rajiv Bindal thanked the Chief Minister for dedicating developmental projects worth crores of rupees in his Assembly constituency. He said that the pace of development gained momentum since the present state government assumed office under the visionary leadership of Jai Ram Thakur.

He said that the new complex of the Nahan medical college would go a long way in providing best and specialised medical facilities to the people of the State. He also detailed various developmental demands of the area.

Health and Family Welfare Minister Vipin Singh Parmar said that the State was making great strides in every spheres of development under the dynamic leadership of Chief Minister Jai Ram Thakur. He said that the medical college Nahan would prove to be a milestone in the field of quality health and education. He said that this building would be ready by next two years. This institution would have all modern facilities with five ultra modern Operation Theatres.

iednewsdesk May 21, 2022
The Watermark was awarded by the National Coordinating Centre for Public Engagement (NCCPE) in December of last…