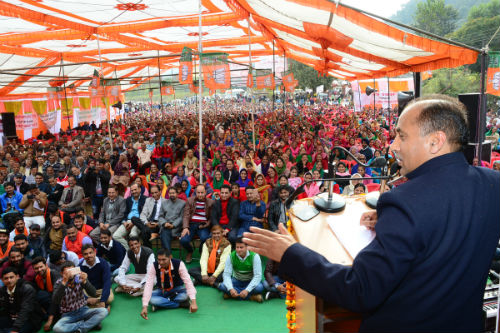 Report by Vijyender Sharma, Shimla: Chief Minister, Jai Ram Thakur while addressing a huge gathering at Shivnagar in Jaisinghpur assembly constituency of district Kangra said that my government would not resort to vendetta politics, however those who didn’t adhered to the work culture or ignored their duty would be dealt with accordingly. My government took a strong decision of terminating the services of retired and tired who were enjoying the undue privilege of the congress government, he said.

There was a major decision of reducing the age of social security pension from 80 to 70 years to provide enough needed succour to the elderly. There were more welfare policies for the elderly of the state in the offing and in near future the government will ensure that our elderly get the respect and dues they deserve.

“I am open to the suggestions in public interest and for welfare of the people of the state as I am the Chief Minister of a common man from common background”, he said.

He said that it was though visualised that the BJP will form the government in the state, but the people of Kangra and Mandi, the two bigger districts, ensured that the congress was completely routed out. The people of Kangra and Mandi played a pivotal role in formation of BJP government and I assure that we will come upto their expectations. He said besides 44 seats the BJP won the two independent MLAs were also supporting us. We have to change the repetition pattern of formation of alternate governments after every five years, said the Chief Minister adding that henceforth the BJP was for-seeing to rule for next 20 years in the state with co-operation and Love of people of the state.

I was informed on my tour to Kangra, that as of now there were no such projects which we can inaugurate or lay foundation stones of, as the previous government in haste and without adequate budget went on foundation stone laying spree and half-done inauguration of incomplete projects nearing elections, he said adding that he was on his winter sojourn to meet the people and listen to their grievances, to talk with them and understand their problems.

The Chief Minister said that this would not only to provide economic opportunities to people living in the vicinity of the border but would instil a sense of security among the people living in border areas.

My Government launched ‘Guddiya help line’ toll free number 1515, said the Chief Minister for safety of women thus fulfilling the commitment we made, adding that it would we ensured that the action was taken within 48 hours against the culprits.

In addition to this our government launched ‘Shakti Button’ , a mobile App for safety of women with unique features. Apart from this we launched ‘Hoshiar Help line, on toll free number 1090 to tighten noose around the Forest mafia which was being monitored by Chief Ministers office, said he.

• The Chief Minister announced a sum of five crore for degree college at Shivnagar in Jaisinghpur assembly constituency, and urged for selecting additional land for the same

• Announced that the road from Alampur to Harsipattan (which was de-notified by previous congress government) as a Major District Road.

• Announced setting up Sub-Depot of HRTC in Jaisinghpur and also announced a sum of Rs. 50 lakh for the Bus stand, provided extra land is made avialable for the same.

He said that the government would sympathetically consider opening of Industrial Training Institute at Dhar. The Chief Minister also thanked Vishnu Sutt Sharma for donating land for the college to be opened at Shivnagar.

Irrigation and Public Health Minister, Mahinder Singh Thakur, and Health and Family Welfare Minister, Vipin Parmar also spoke on the occasion. They said that the people this time wanted change, a complete transition of leadership in politics of Himachal Pradesh, adding that the regime of Jai Ram Thakur would be remembered for massive development and for taking instant decisions in welfare of the people.

They also lambasted the previous congress government for wasting funds and time on preparation of Detailed Project Reports of 69 National Highways sanctioned by NDA Government a year and a half before.

Mahinder Singh Thakur exhorted the people for storing rain water harvesting structures. He said that the area have lot of potential for construction of Check dams on various rivulets and can be used for irrigational purpose. We have to preserve every drop of water, he said.