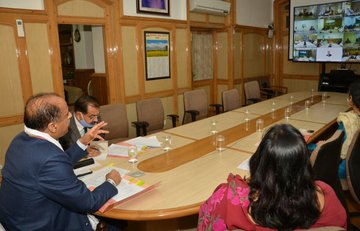 Shimla: The State Government was spending an amount of Rs 586.82 crore on overall development and welfare of women and child in the State. This was stated by the Chief Minister Jai Ram Thakur while interacting with the Anganwari Workers from different parts of the State through video conference from Shimla today.

Social Justice and Empowerment Minister Dr. Rajiv Saizal thanked the Chief Minister for sparing his valuable time for interacting with the Anganwari workers. He said that the State Government under the leadership of Chief Minister has effectively controlled the coronavirus in the State.

Advisor to the Chief Minister Dr. R.N. Batta and Director Social Justice and Empowerment Kritika were also present on the occasion.

India Education Diary Bureau Admin May 17, 2022
Delhi: With the use of technology at a sudden surge and newer innovations unfolding every minute, the knowledge of…