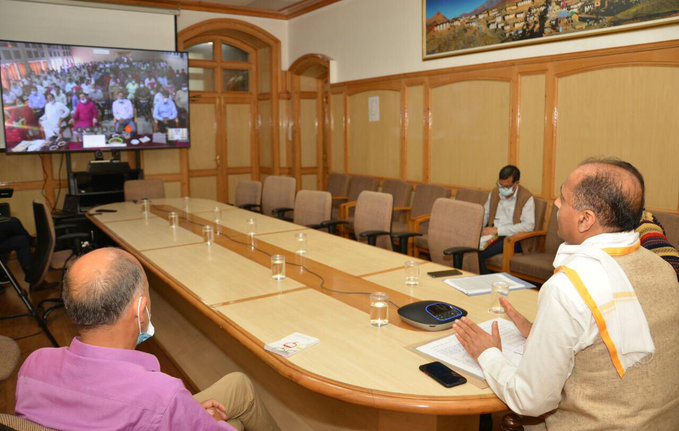 Chief Minister said that under the Swadesh Darshan Scheme, a convention centre was coming up at Kiarighat in Solan district with a cost of Rs. 25 crore. He said that the work would be completed by the end of December this year. He said that work was in progress regarding construction of heliport at Shimla which would be completed by September, 2020. He said that work of village Haat at Kangra, free standing artificial climbing wall at Manali, art and craft centre at Bhalei Mata temple Chamba were also under progress.

Jai Ram Thakur directed the officers to ensure time bound completion of paragliding centre at Bir in Kangra district. He said that the light and sound show being started in Shimla would be completed by March next year which would prove added attractions to the tourists. He said that signage’s, gantries, CCTV and WIFI system were also being provided throughout this Himalayan Circuit under the Swadesh Darshan Scheme.

Chief Minister said that the State has immense potential for religious and spiritual tourism. He said that a Shivdham was being established at Mandi besides construction of ghats for performing Aarti on the banks of Beas in Mandi and also in Kullu district. He said that water sports centre would be constructed in Sunni and Tatapani area, which would be developed as a major tourist destination.

Chief Minister said that Atal tunnel would emerge as a major tourist attraction in the coming times. He directed the officers to ensure time bound completion of development of North and South Ports of the tunnel besides procurement of the Vista Dom bus which would be a tourist delight to have glimpse of Himachal while passing through the Atal tunnel.

While laying emphasis on time bound completion of various ropeway projects in the State, Jai Ram Thakur said that the work on major projects such as Adi Himani-Chamunda, Dharamshala Ropeway, Palchan to Rohtang Ropeway and Sri Anandpur Sahib to Shri Naina Devi Ji Ropeways should be completed in time bound manner. He said that this would not only facilitate the tourists but also avoid price escalation of these projects.

Jai Ram Thakur said that the State Government has decided to start a Craft and Tourism Mela in the State on the pattern of Surajkund International Fair to promote traditional crafts of Himachal Pradesh. He directed the officers to expedite the matter regarding transfer of land near Kandaghat in Solan district, so that it could be constructed at earliest to organize this fair.

Chief Minister said that the COVID-19 pandemic has adversely affected the tourism industry of the State. He said that the government has started interest subvention scheme for the working capital loans for the potential entrepreneurs. He said that demand charges for electricity for tourism units were waived off by the State Government.

He said that like other tourists states such as Uttrakhand, Rajasthan, Goa, Kerala etc., the State Government has decided to open the State for tourists with strict SOPs. He said that only those tourists would be allowed in the State who have valid booking for duration atleast five days and have being tested for COVID-19 by an Indian Council of Medical Research (ICMR) accredited laboratory not earlier than 72 hours at the time of entry to the State.

Secretary Tourism Devesh Kumar welcomed the Chief Minister and made a detailed presentation regarding various tourism projects being undertaken in the State.

Modalities for implementation of Mission Youth program discussed at Ganderbal