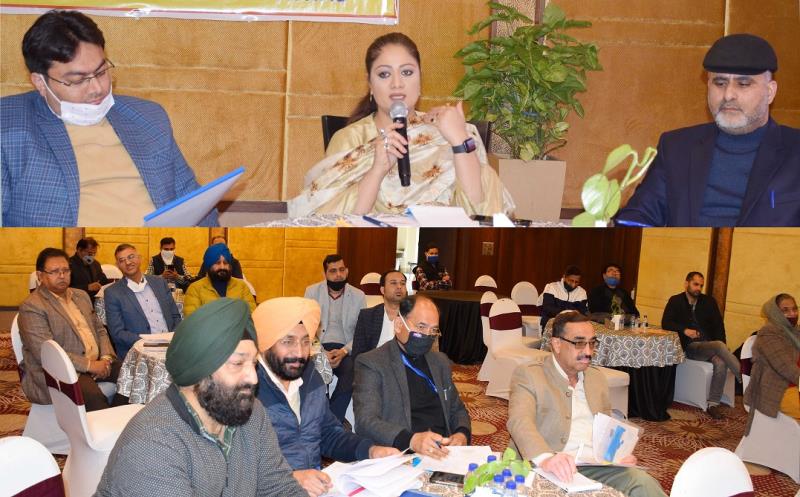 Hina Bhat lauds KVIB for achieving targets under PMEGP, REGP; Asks banks to act as facilitators in tiding over unemployment in J&K

Jammu: Vice Chairperson, Jammu and Kashmir Khadi & Village Industries Board (KVIB), Dr Hina Shafi Bhat, today exhorted upon the banks to act as facilitators in creating employment opportunities for youth as they are the backbone of all the entrepreneurial activities.

She, while chairing a bankers review meeting of the Board for Jammu division, asked all the participants to work in mission mode for implementing employment generation programmes in the UT.

Vice Chairperson asked the banks to review their policy of taking guarantors or mortgage from the applicants up to a certain amount. She also asked them to clear their pendency at all levels.

She further asked them to encourage the applicants by processing their applications at a brisk pace with simple procedures.

Dr Hina applauded the achievements registered by KVIB division Jammu. She asked them to carry on the momentum and aspire to accomplish achievements beyond the set target.

Secretary/CEO asked the Bankers to settle pending cases in banks and release 1st installment at the earliest.

In a power point presentation given by Deputy CEO, it was elucidated that for both the employment generation schemes of Prime Minister Employment Generation Programme (PMEGP) and J&K Rural Employment Guarantee Programme (REGP) the Board is all set to achieve the set results.

It was also informed that under PMEGP against a target of 390 units KVIB Jammu has released margin money to 401 units thereby creating employment for 3208 persons. It was also disclosed that a total of 767 units have been sanctioned till date for which a margin money of Rs 1944.97 has been released by the Board.

Similarly, under JKREGP 291 units have been provided a margin money of Rs720.00 lakh creating employment for 3616 persons registering a financial target of 79.64 per cent prior to 2 months before the end of financial year.

DDC reviews progress of schemes implemented by RDD at Shopian