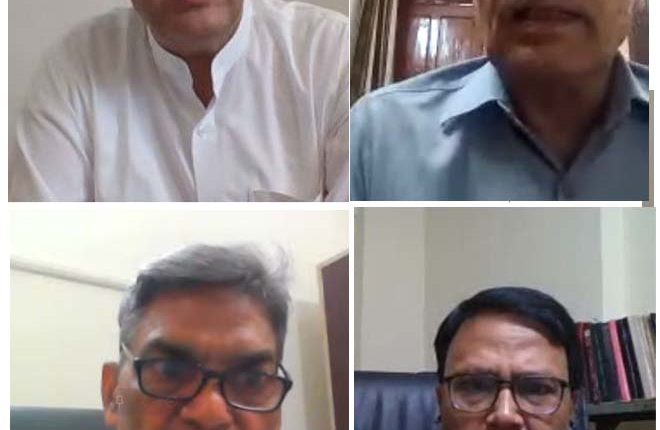 Aligarh, September 14: “The influence of Hindi language is increasing continuously. It can rightly be called as the soul of the Country, playing an important role as a link language between Indians of different linguistic backgrounds”, said Prof Hari Shankar Mishr (Former Lucknow University Faculty Member).

He was delivering an online lecture on ’75 years of Independence: Reality and Challenges of Hindi Language’ as the Chief Guest of the ‘Hindi Day’ celebrations of the Raj Bhasha Implementation Committee, Department of Hindi, Aligarh Muslim University (AMU).

“But, when we celebrate the richness and popularity of the Hindi language, let us not forget that Hindi is yet to become the language of affairs in law, justice, defence, politics, science and technology”, stressed Prof Hari Shankar.

He emphasised that the Hindi language should be adapted and used for development in any field across the country.

Presiding over the programme, AMU Vice Chancellor, Prof Tariq Mansoor said that Hindi has become an influential language globally and hoped that Hindi and other Indian languages would be widely used in different spheres of life in the country.

Addressing the online function, Prof Mansoor emphasised that the significance of Hindi in all walks of life has increased manifold over the years and the language is now taught in many reputed universities in different countries.

“Hindi has become an influential language globally and more interdisciplinary research with other languages will further increase its popularity,” he said.

Prof Ramesh Chand (Chairman, Department of Hindi and Secretary, Raj Bhasha Implementation Committee) said that Hindi is one of the five top most spoken languages of the world and we have to encourage translations of Hindi literature into other Indian regional languages and vice-versa.

Convenor of the programme, Prof Shambhunath delivered the welcome address.

Kulsum Shamim extended the vote of thanks.