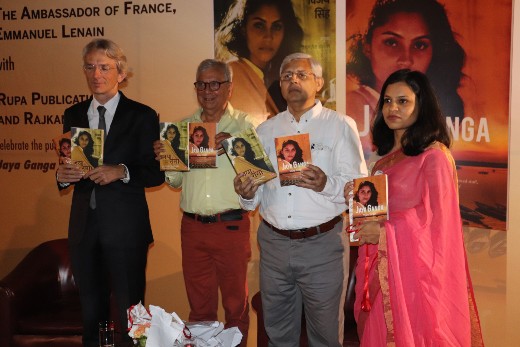 New Delhi: The book launch of Jaya Ganga by author Vijay Singh, took place at the Embassy of France, New Delhi. The event was hosted on the occasion of the Hindi translation of the novel by Rajkamal Prakashan Samuh, as well as the reprint in English by Rupa Publications. The Hindi translation was launched by The Ambassador of France Mr. Emmanuel Lenain; Managing Director of Rajkamal Prakashan Samuh Mr. Ashok Maheshwari; Deputy Managing Editor at Rupa Publications, Nishtha Kapil; and the author himself Mr. Vijay Singh. The Hindi translation of the novel has been done by the late renowned Hindi poet and writer, Mangalesh Dabral. The novel was adapted into a film by Vijay Singh himself. It ran for a record 49 weeks in Paris and the UK cinemas after being screened in 40 countries on every continent. The trailer was shown at the event.

The novel is about the quest of a young Indian from Paris journeying down the Ganga.

The event started with Emmanuel Lenain congratulating Vijay Singh and welcoming everyone present at the event; and speaking on the good relations between India and France and their literatures.

Ambassador of France Mr. Emmanuel Lenain said, “I am glad to host the launch of the translation in Hindi and the re-print in English of Jaya Ganga, and proud that the French Institute in India could support this endeavour. Vijay Singh is a true friend of France and through his career as writer, film director and journalist, he has played a major role in the cultural relationship between our two countries. France and India are two nations with exceptional literary traditions, and we are keen to boost ties between our authors, publishers and readers. I look forward to next year’s New Delhi World Book Fair, where France will be the guest of honour.”

Managing Director of Rajkamal Prakashan Samuh Mr. Ashok Maheshwari said, “We should remember Mahatma Gandhi and Romain Rolland on this occasion. The Embassy of France and the French Cultural Centre have been instrumental in the cultural exchange between the two countries. Publishing books is a big part of it.  Nowadays many books from French are translated and published in Hindi and Indian languages. Also, a number of books are being published from Hindi to French, and I hope this number increases. Many books on India have been written there – on Indian History, Indian Politics, Philosophy, there are many such subjects on which books have been written there. Their translation should also come in Hindi. France is the guest of honour at our country’s World Book Fair this year. We are pleased with this. A delegation of French authors and publishers will come to India on the occasion, we would like to talk to them face to face. Maybe there are more ways to go forward. Thank you all on this occasion.”

Following this, journalist Anjilee Istwal of NDTV interviewed Vijay Singh. Answering a question on the novel and the film being based on slightly different stories, he said that the best answer to this question was given by a young lady in San Francisco at a screening. She said when you close the book and close the film it leaves you with the same sentiment.

Author Vijay Singh Said, “Hindi is close to French in sentiment. People speaking in Hindi and French say similar things but in different metaphors.” Mentioning Mangalesh Dabral he said. “One of the last things the late poet told me was Don’t worry about Hindi ka prakashan, main use sambhalunga”. Further on his novel he said that, “The novel was written in seven and half weeks, and it was written spontaneously.   Travelling on the Ganga was a difficult journey: there was very little water in the river for most upstream parts, there were no boats, and there was rampant crime. The endeavour of my works is to bring surrealism and spirituality together.”

After this Mr. Emmanuel Lenain, Mr. Vijay Singh, and the publishers interacted with the esteemed and learned audience present at the event, and exchanged their love for Hindi and French.

In the novel, Nishant, a young Indian writer living in Paris, journeys down the Ganges, from its source in the Himalayas to the sea. Haunted by the memory of a beautiful Parisiènne called Jaya, he plans to write a book around this voyage. On the banks of the Ganges, he chances upon Zehra, an irresistible dancing girl in the tradition of the great tawaiffs, who performs in a nearby brothel. Zehra resurrects the memory of Jaya.

With Jaya and Zehra inhabiting his mind, Nishant undertakes an entrancing journey down the Ganga replete with unexpected encounters with Sadhus, boatmen, engineers, vernacular journalists, tawaiffs, pimps, administrators, Bollywood stars like Amitabh Bachchan on his election campaign, and the omnipresent pandas.

Rarely before have poetic prose and class journalism been brought together with such effortless and readable ease.

Jaya Ganga is now available in Hindi on the Rajkamal Prakashan website and other leading online platforms.

Bringing India to Indians (and the World): Shiv Kunal Verma conducts a soft launch of his new series of Illustrated books at PLF

Amazon India announces “A Day At Amazon”; an initiative to nurture future leaders