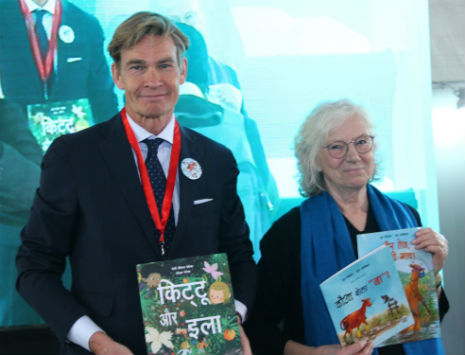 New Delhi, 09th January 2018: It was a memorable event for children present at the Children’s Pavilion at the New Delhi World Book Fair 2018, as 3 famous Swedish children’s books were released in Hindi by H.E. Klas Molin, Ambassador of Sweden to India and renowned Swedish author Jujja Wieslander. The launch was followed by gaving away signed copies to the interested children.

The Mamma Moo series is about a talking cow and her best friend, a crow from the nearby woods. The series is loved by children across the globe and translated into over 30 different languages. The Mamma Moo series has 10 titles – of these 8 are available in India in Hindi and 2 in English.

3i Infotech Collaborates with MDEC to Build ASEAN…

Ms. Jujja Wieslander said, “I am looking forward to come to New Delhi Book Fair and see children enjoy the new books about Mamma Moo and Crow. A&A Book Trust is now releasing number seven and eight in the series. The books have been translated into more than 30 languages and I hope they will translate it in many more Indian languages as well.”

Jujja Wieslander is a Swedish children’s book author and member of the Swedish Children’s Book Academy. Mamma Moo is her best known series and has travelled with different languages in Europe. The stories have been made into radio shows and a children’s film. These have been incredibly popular winning several honours and awards.

“Children’s literature is very close to our hearts, with many strong characters embodying the rights and possibilities of every child. They enable us to talk about both fun and difficult subjects in a natural and approachable way.

Swedish Children’s books in Hindi are not new to India. This year, we are celebrating 20 years of Mamma Moo in Hindi,” said Klas Molin, Ambassador of Sweden to India. With the release of three more Swedish children’s book, more Indian children will now be able to get closer to Sweden”

Ms. Arundhati Deosthale Editor, A & A Book Trust, said during the launch “It has been part of our mission as a publishing house to add sunshine and laughter to the world of underprivileged children through our books brought to them in our own language, Hindi. Our books are essentially multicultural serving as a cheerful window to broader world outside. Translator Avanti Devasthale has done a great job bringing these alive!!”

Committee to be setup on zero budget natural farming in Himachal Pradesh: Governor