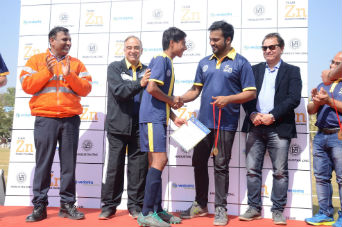 Udaipur: Hindustan Zinc’s below 12 years, international level residential Football Academy organized the closing ceremony of its 24-days Residential Team Zinc Football Camp at Chittorgarh on 3rd February 2018. The event was attended by the Chief Guest, Mr. Annanya Agarwal  – President, Vedanta Football Project and son of Mr. Navin Agarwal – Chairman, Vedanta Limited. He is spearheading the Football Sports in all Group Companies of Vedanta. Mr. Annanya has a vision to create world class Football players out of India and wants to aid in India’s qualification in World Cup Football.

The Academy is going at the grass-root level to select 40 talented & aspiring footballers, to nurture & train them as professional players. In order to penetrate in rural and tribal areas, the Academy is also organizing 64 Community Football Clusters in 5 identified districts of Rajasthan that will nurture 2500 football enthusiasts through camps to form a 20 players team each of girls and boys at each Cluster. So far, the Academy has shortlisted 56 children through 23 Talent Scouting Camps that saw the participation of over 3000 children from 5 districts of Rajasthan – Udaipur, Bhilwara, Chittorgarh, Rajsamand and Ajmer. These identified 56 children joined the 24-days Residential Team Zinc Football Camp at Chittorgarh that started form 10th January, 2018.

During the event, Annanya Agarwal said – “There is a huge talent that is hidden in rural and tribal areas, unexplored, and they just need guidance, support and opportunities. I am happy to see that through Hindustan Zinc Football Academy, we are opening the prospects for these aspiring footballers. It is also heartening to receive such a good response from their families and the enthusiasm of both participants & coaches is stimulating. I am confident that some of these players will have the potential to be selected for the national football team & clubs and would also be eligible to participate in international football tournaments in future.”

Vinod Wagh – Site President, CSC welcomed the guests, participants and their families during the program and briefed about the objective of Hindustan Zinc Football Academy.

One of the participants, Raghva Janghid from Ajmer was thankful for this wonderful opportunity where he got to learn both discipline and technical aspects of the game. Mr. Shakeel, father of one the participants from Chittorgarh said – “with such kind of encouragement and support, we can see our children participating in Under-14 matches in next 2 years.”

Post this camp, based on the performance, merit, physical, mental & psychological attributes, the Academy has selected atleast 20-40 children who will join Residential course of Hindustan Zinc Football Academy in Zawar, Udaipur. At Academy, these children will undergo rigorous training to become professional football players and play in various Local, National and International Football Tournaments. Their training and grooming would be monitored by experts that would include health & fitness experts and nutrition & diet experts. Their skills, body weight, energy, strength and stamina would be tested and monitored on regular basis.

Pavan Kaushik – Head Corporate Communication informed “The Company’s vision is to set-up a world-class technology based fully residential Football Academy to provide a 360 degree holistic platform for talented footballers from Rajasthan, both boys and girls, who will get an opportunity to get trained and play for the Indian National Team. Hindustan Zinc has tied-up with ‘The Football Link Sport’ for setting-up this state-of-the-art Football Academy.”

The ultimate objective is to reach out to more than 60,000 children in 100 villages and tribal areas of Rajasthan in next five years.

Also present were the Coaches, families of participants, Hindustan Zinc and The Football Link representatives during the event.

India is moving ahead with formula of Reform, Perform and Transform: Vice President

India Education Diary Bureau Admin Sep 18, 2021
Aligarh : As per the directives of the Ministry of Agriculture and Farmer Welfare, Government of India, a…