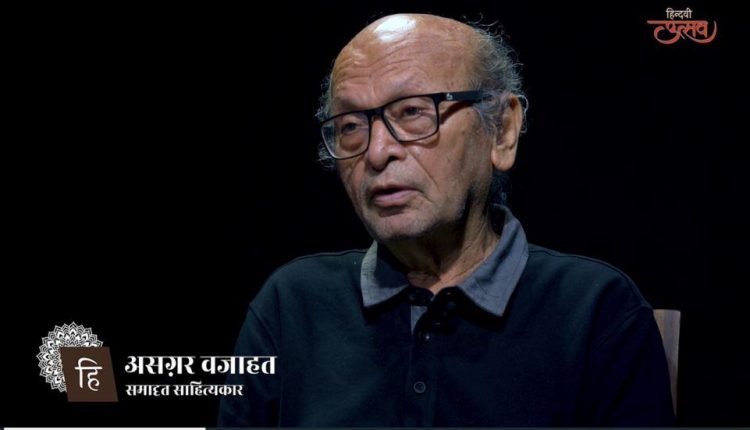 New Delhi: Hindwi.org, an initiative of Rekhta Foundation, dedicatedly working towards the preservation and promotion of Hindi language, literature and culture celebrated its first year anniversary by organizing an online event ‘Hindwi Utsav’ which streamed on Hindwi Official Facebook page.
Commending on Hindwi’s vast audience reach and outstanding growth in a short period of time, renowned poet & writer – Arun Kamal lauded that Hindwi.org is one of the few websites that offer such diversity in literature, including categories in poetry, pad, doha, lokgeet, blog, dictionary and now, even prose. He proudly called Hindwi.org as the torch bearer in carrying forward the legacy of Hindi literature for generations to come. He appreciated Hindwi for its digital outreach for audience who prefer to read in Devnagari script.
During the event a panel discussion was held on topic “Gatha, Katha, Kahani” with literary writers Asghar Wajahat and Yogendra Ahuja as panelists and moderated by Syed Md. Irfan.
The discussion was held around the evolution of Hindi literature, its euphoria, early development and present state.
Asghar Wajahat said, “Premchand’s writing style was influenced from west. The west style of story writing involving characters, description, plot, narration, and conclusion is reflected in his stories as well.” He mentioned that with evolution of writing, the epitome of Indian culture’s traditional writings, which has been multi-dimensional, vanished becoming single dimension. However, the definition of story writing cannot remain static and is witnessing comprehensive expansion with time. He particularized that on many occasions like at the time of emergency, the writers took inspiration from traditional style of story writing that highlighted serious issues in a fictional form. He urged to maintain the amalgamation of traditional and modern writings to maintain the identity of Indian literary writings.
“Hindi fiction is moving in many directions, the writings are diversifying in vernacular languages as well as concept wise. With digital outreach, there has been a significant rise in Hindi literature readers as what we had four to five decades back. Many writers are now writing on the realities & issues of other states and countries which have generated interest of readers, subsequently, expanding the reader base.” he apprised.
Responding to the question around impact of printing press/publication houses, Asghar Wajahat opined that the major drawback faced by introduction of printing press was that the tradition of oral and creative storytelling like Dastangoi was impacted and lost its essence.
Sharing his views, Yogendra Ahuja stated that Pandit Madhavrao Sapre introduced the concept of modern Hindi literature in 1900s with his story ‘Ek Tokri Bhar Mitti’ written in Khari Boli followed by Ramchandra Shukla’s authored ‘ Gyarah Varsh ka Samay’ in year 1903 and then Rajendra Bala Ghosh’s ‘Bang Mahila’ encapsulated the modern language writings. Communicating his opinion on modern and traditional story writings, he highlighted that both the writings have their own importance as the objectives of the traditional stories were different, more focused on moral learnings and the purpose of the modern story revolves around the societal questions and issues of present times.
Yogendra Ahuja further added on that though printing press led to limitations on traditional storytelling but also allowed new authors from across the world reach the global audience.
During the occasion, to commemorate the birth anniversary of Munshi Premchand Hindwi launched the Prose Section on Hindwi.org. Also, official YouTube channel of Hindwi was launched.
Many prominent personalities Actor Gajraj Rao, Writer/Lyricist Varun Grover, Actor Manoj Bajpayee, Actor Rajendra Gupta, Shailesh Bharatwasi – Director – Hind-Yugm, Writer Pratyaksha amongst others send out personal wishes for Hindwi on its anniversary.
The event concluded with the musical session by ‘Rahgir’. He mesmerized the audience with by singing Hindi popular poems “Akaal aur Uske Baad”, “Samay ka Pahiya”, “Unka Darr”, “Nayi Duniya” and his own compositions “Kya Jaipur and Kya Dilli” & “Alsi Doopahar”.

T-Hub and HCL Technologies to collaborate on Quantum Computing, DeepTech and other technologies through open innovation