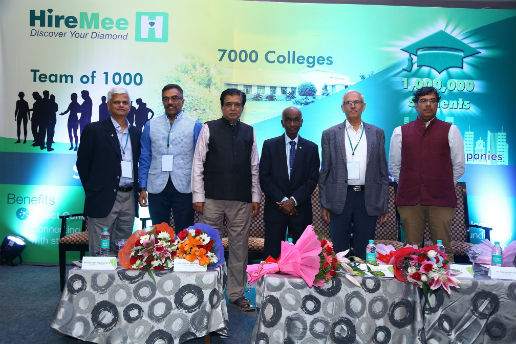 HireMee – Bridging the gap between recruiters and prospective hires

Bangalore: HireMee has launched its new platform that aims at cutting down the placement stress for both the students and the recruiters. HireMee is a CSR initiative by the Sona Group of companies that aims to bridge the gap between the job seekers from Tier 2 and Tier 3 and cities for large and small recruiters. The platform already has 3000 users in its beta stage and is set to change the game with its free for all model covering a million students.

The company as of now has invested more than $ 1 million in the platform and intends to invest an equal amount in the next twelve months. It aims to be the largest platform in India for recruiting raw talent from smaller towns of the country that often get overlooked when it comes to talent acquisition. The new platform combining the app and the portal was launched in the presence of Mr. Panduranga Shetty, President – COMEDK / Rashtreeya Sikshana Samithi Trust and Mr. Sanjeev Sahi, President & Group Head HR at GMR Group. Several well-known state govt officials have supported the app, which include names like Mr. H.U.Talawar, Director, Directorate of Technical Education and Dr.S.A. Kori, Executive Director & Member Secretary, Karnataka State Higher Education Council.

Commenting on the launch, Mr. Chocko Valliappa, Founder, HireMee, while outlining his vision, for the revolutionary new portal, said, “We are committed to ensuring that India’s talented work force is not lost for want of an effective channel bridge. The app will ensure a seamless and simplified channel between corporates and fresh graduates who want to break into the job market. The karmic pricing will ensure that both sides benefit from it equally and immensely.”

The team at HireMee took the guests, comprising 200 up attendees from 75 colleges and thirty up corporates, from across the Karnataka, Telangana, Tamil Nadu, Maharashtra, Kerala and Andhra Pradesh through the App model. The app has unique features that allows the students to upload videos from their smart phones and for recruiters to select the right candidate for the right job. Also, a 100 minutes free assessment test will be provided to all the students and all pre-assessed video profiles with assessment scores, that will cover 7 areas of aptitude, will be accessible to recruiters on the platform saving a lot of time for them.

Mr. Valliappa also added that the team will ensure that recruitment facilities in both Urban and Rural areas are at par. The karmic pricing ensures that the product is free and in turn encourages people benefiting from it to further facilitate creations of more jobs and recruiters.