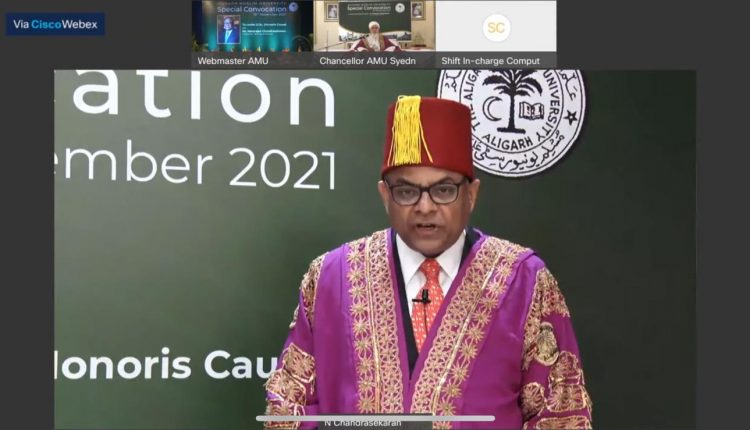 Aligarh: His Holiness Syedna Mufaddal Saifuddin, Chancellor of Aligarh Muslim University and head of the Dawoodi Bohra community, presided over a special convocation in which Mr Natarajan Chandrasekaran, Chairman of Tata Sons, was conferred with the degree of Doctor of Science (honoris causa). The honorary degree was in recognition of Mr. Chandrasekaran’s exemplary leadership of the Tata group of companies and his contributions towards enhancing business thinking and practices in India and elsewhere.

Vice Chancellor of Aligarh Muslim University, Professor Tariq Mansoor listed some of the prominent individuals who have previously been honoured by Aligarh Muslim University with similar degrees, and described Mr. Chandrasekaran’s many achievements. He also spoke of the numerous contributions made by Aligarh Muslim University and its alumni to the fields of business and commerce. A citation was read out in honour of Mr Chandrasekaran, who then proceeded to address the audience. He described the challenges faced by citizens of India today and his aspirations and ambitions to help improve the quality of life for all Indians, regardless of their background.

Towards the end of the special convocation, the Chancellor, His Holiness Syedna Mufaddal Saifuddin, briefly addressed the audience. He described Islam’s emphasis on trade and commerce and how they must ultimately lead to the betterment of society at large and all of Creation. He stated that a business can only be considered truly profitable if it is a means to improving the lives of others. Syedna prayed for the continued success of AMU and that Indians and all citizens of the world remain protected from the remaining effects of the pandemic.

KVIB organises awareness program on self- employment schemes at Kootah

JKAACL organises Exhibition of art works created by students during…