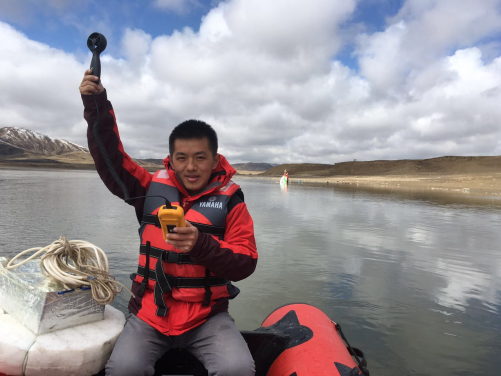 Inland waters are an important component of the global carbon cycle and function as active reactors, transporting and transforming large quantities of naturally- and anthropogenically-derived carbon. Previous studies suggest that inland waters are major sources for greenhouse gas emissions to the atmosphere, yet these emissions are poorly constrained (Note 1).

As a primary greenhouse gas that drives global climate change, carbon dioxide (CO2) emissions from inland waters play a key role in assessing global carbon cycle. While most efforts over the last decade have focused on refining the emission flux estimates at the regional and global scales, scientists do not fully understand the responsiveness of regional CO2 emissions from inland waters to global change. Recent studies demonstrate that they are subject to upward revisions because key regions, such as China, have not been properly included.

Researchers at the Department of Geography of the University of Hong Kong (HKU), together with collaborators from Australia, Germany, Switzerland, China, and the USA, have for the first-time, quantified CO2 emissions from streams, rivers, lakes, and reservoirs in China over the last three decades and compared two time periods: 1980s and 2010s, during which China experienced unprecedented environmental and socio-economic changes. The first period refers to the 1980s prior to massive anthropogenic perturbations, while the second period (the 2010s) is posterior to extensive damming and intensive land use change. The findings have recently been published in academic journal Nature Communications.

In combination with remote sensing techniques, the research team estimated CO2 emission flux from Chinese inland waters based on historical water chemistry data collected at 1,709 locations in the 1980s and recent field sampling at 1,064 sites across China, analyzing nearly 200, 000 water samples collected over the period.  The team used an unprecedented spatiotemporal dataset to reconstruct past perturbations caused by rapid environmental and socio-economic changes, and investigated their impact on CO2 emissions from Chinese inland waters.

“Our findings suggest that this unexpected decrease was driven by a combination of environmental alterations, including massive conversion of free-flowing rivers to reservoirs and widespread implementation of reforestation programmes. Conversion of free-flowing rivers to reservoirs which show physicochemical properties analogous to lakes caused a significant reduction of CO2 emissions,” said lead author Dr Lishan Ran at the Department of Geography of the Faculty of Social Sciences, HKU.

“China has engaged in a dam boom since the 1980s with a surging economy that spurred the need for energy and food production. With about 15,000 new reservoirs being completed between the two periods, the storage capacity of reservoirs more than doubled. Therefore, the reduction in stream surface area between the two periods has been offset by the simultaneous expansion of lakes and reservoirs.” Dr Ran explained.

The Tibetan Plateau is spatially the only region showing increased emission from streams/rivers, lakes and reservoirs, with riverine and lake CO2 efflux increasing by 18% and 81%, respectively. This reflects the expansion of the stream networks and increasing flow due to melting glaciers, snow, and permafrost and increasing precipitation in the region. The stream surface area on the Tibetan Plateau increased by 8.5% and 2.5% in the dry and wet seasons, respectively. In comparison, the riverine CO2 evasion in all other regions presents strong declines of 31% to 56%.

“Since CO2 loss through inland water evasion is not yet incorporated into current carbon budgeting of China’s terrestrial landscape, we conclude that ignoring carbon outgassing from inland waters will likely result in significantly overestimating the terrestrial carbon sink by ecosystems, such as forest.” Dr Ran said.

From the findings, the efflux estimates could reduce the magnitude of the terrestrial carbon sink within China for the 1980s by 24% to 59%. As a result of implementation of nationwide ecological restoration programs since the early 1980s, terrestrial ecosystems across China have been greatly restored in the 2010s. Even so, accounting for the simultaneous CO2 evasion from Chinese inland waters suggests that the overall carbon sink capability of China’s terrestrial ecosystems in the 2010s could be offset by 17% to 21%.

“Considering that China’s diverse climatic and geomorphologic systems mimic global landscapes and comprise most of the global vegetation types, we contend that excluding inland water CO2 evasion could produce significant errors in understanding the role of terrestrial ecosystems in the global carbon balance. The research result is also significant for global carbon emission assessments. The efflux estimate from Chinese inland waters represents 5% to 7% of the global estimate and would cause about 0.1 billion tonne of carbon  increase over previous global-scale estimates. “Dr Ran said.

“This study represents the first comprehensive approach to evaluating changes in aquatic CO2 emissions through time. We showed that direct management of both terrestrial and aquatic systems has the potential to significantly impact the carbon emissions from inland waters. Only an accurate assessment of CO2 emission change due to management practices, and their influence on water resources, will allow us to fully understand how to couple aquatic carbon loss with terrestrial ecosystems.” Dr Ran added.

iednewsdesk Oct 28, 2021
Many animals have tusks, from elephants to walruses to hyraxes. But one thing today’s tusked animals have in…