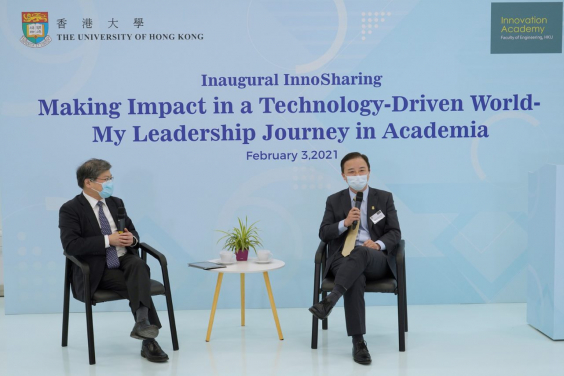 Professor Xiang Zhang, the President and Vice-Chancellor of the University of Hong Kong (HKU), has called on students to be creative and persistent in pursuing their dreams and interests at an inaugural talk held at the University’s new Innovation Academy of Faculty of Engineering.

His talk marked the launch of the InnoSharing series of forums and dialogues that are among activities and programmes run by the academy to foster innovation and cultivate talents.

A former Chair Professor at the University of California, Berkeley, Professor Zhang recounted his research efforts in metamaterials and material physics, which helped lay the basis for breakthroughs in the invisibility cloak and supermicroscope. Advancement in the areas have wide applicational value, from nano-scale imaging, compact high frequency (resolution) MRI to bio-molecule sensing.

Professor Zhang’s talk was entitled “Creating Materials that Do Not Exist in Nature – From Super Lens to Invisibility Cloak”. An elected member of the Chinese Academy of Sciences (Foreign Member), US National Academy of Engineering and Academia Sinica, he recently received the 2021 SPIE Mozi Award conferred by the International Society for Optics and Photonics in recognition of his seminal, fundamental contributions in optical physics and experimental research in the optical perfect lens.

He stressed that innovation should not be limited to STEM fields alone, but is also needed in fields including medicine, social sciences, and arts etc. “We hope HKU will show the world that we can create a better world by synergizing Innotech with humanities.”

But he acknowledged that failure and hardship are an inevitable part of innovation. “In scientific research, you fail 95% of the time. Many students may have already experienced that. The spirit of never giving up and keeping a clear goal is very important.” He therefore emphasised that one should be prepared to embrace failure.

Research innovation is often driven by curiosity, he added. But success never come easily. “We can aim high but don’t expect a score of 100; if you can get 80, that’s pretty good.”

Twenty-five years ago, he recalled, he failed to get funding support for a project on 3-D printing of human organs. Nowadays, biological printing is a big thing.

“It was not the right timing for me,” he said. “But as an innovator we should not give up; persistence is very important, you have to be resilient.”

Emphasising the importance of creativity, he told students not to be intimidated by limited knowledge. “Bill Gates didn’t finish college, and Steve Jobs, the founder of Apple, was a school dropout. It’s creativity that drove them. And they worked very hard towards their goals.”

An invaluable lesson he learned when he was an undergraduate student was never to be afraid of asking questions, he recalled. He was inspired by an academic who had returned from the States and who kept asking students questions at a seminar. “Challenging the books and existing knowledge, that’s how you can make advancement.”

Housed at the newly-built two-storey Tam Wing Fan Innovation Wing at the Hui Oi Chow Building, the Innovation Academy has the prime mission of inspiring faculty, students and the industrial sector to pursue ground-breaking projects benefitting business and the society, and providing a well-equipped, stimulating environment for state-of-the-art research projects.

Encompassing a world-class integrated makerspace rarely found in Hong Kong and Asia, the Academy connects students from all ten faculties at the University for cross-discipline collaboration.

The concept of makerspace originated in the US where groups of people with shared interests gather to work on projects while sharing ideas, equipment and knowledge.

HKU’s drive for innovation is further backed by generous donations from two visionary individuals: Mrs May Tam and Mr Leslie Chung. Last November Mrs Tam donated HK$20 million for the setting up of the “Tam Wing Fan Innovation Fund”, following earlier donations of HK$100 million and $20 million for the creation of the Tam Wing Fan Innovation Wing I & II respectively. Mr Chung’s HK$15 million donation led to the establishment of the “Philomathia Foundation Innovation Fund”. Both funds are under the Faculty of Engineering.

Professor Norman Tien, Vice President (Institutional Advancement), Taikoo Professor of Engineering and Head of Innovation Academy, described the academy as a magnet to attract talents. “The InnoSharing programme is part of how we want to inspire people using the facilities here. We also want to equip people with knowledge, expertise, experiences and insight. We will have programmes and activities to be able to do that. The other thing we want to do is to showcase what talents, interested individuals have developed at this venue.”

Future activities planned include student-initiated courses on technology-related topics, thematic workshops, InnoShow, as well as InnoChallenge and InnoSupport for engineering students. Professor Tien added: “We will invite more entrepreneurs, industry partners, researchers and alumni to give inspirational sharing in the days ahead.”

About Innovation Academy, HKU Faculty of Engineering
The Innovation Academy is established for nurturing future innovators to generate impactful ideas and products. The Academy serves as a magnet to attract new talents to work together on innovative projects through a series of programmes and activities designed to capture three goals: Inspire, Equip and Showcase. The “InnoHub programme” is dedicated to providing a platform to connect students from all ten faculties at the University for cross-disciplinary collaboration and to prepare them for addressing the grand challenges of the world. The Academy will also establish an industrial consortium leveraging on the collaboration and networking with both local and international industries and industrial leaders, alongside partnerships among industries, business organisations, governments and academia at the University.

Idaliina Friman is the winner of the Designers’ Nest competition

Progression from GCSEs not working for many young people, new research finds