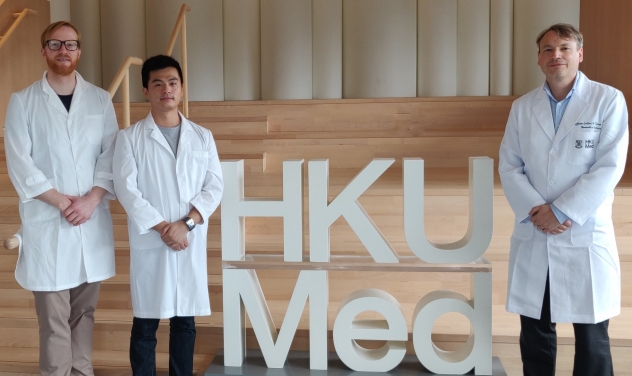 The LKS Faculty of Medicine of The University of Hong Kong (HKUMed) has collaborated with Institut Pasteur, Paris, to develop an approach to evolve molecules which are entirely alien to biology. The researchers have demonstrated the approach by evolving molecules which stick to a malaria biomarker. Critically, these special non-biological molecules are able to carry out tasks which normal biological molecules are intrinsically unable to do. These molecules can, for example, be used to determine the type of malaria with which a patient is infected. The research has just been published in Proceedings of the National Academy of Sciences of the United States of America (PNAS), a top journal in the field of multidisciplinary science. [link to the publication]

One of the lead researchers of the study, Professor Julian Tanner, Professor and Associate Director (Teaching & Learning) of the School of Biomedical Sciences, Assistant Dean (Biomedical Sciences Curriculum), HKUMed, remarked, “Evolution is a powerful idea that is at the centre of all of biology. This study harnesses the evolutionary idea of natural selection, but then applies it outside of the biological context, thus creating an evolution in a test tube approach. One can then use evolution instead of design to develop molecules which can solve challenges in diagnostics and therapeutics. If we can extend evolution well beyond the usual confines of biological molecules such as DNA and protein, then we can open an entire new toolbox which can transform medicine.”

Background
Evolution is understood in biology as the process by which characteristics of organisms are inherited over successive generations under particular selective pressures. Evolution is guided by chance – some members of a population are able to outcompete others which over time define the physical characteristics and behaviour of a species.

It is also possible to apply evolutionary selections to populations of molecules. In a similar fashion, molecules can be made to compete with each other for a particular characteristic. For example, this characteristic might be sticking to specific molecular markers which only exist in the presence of a disease. Such evolved molecules could then be used in diagnosing or treating a disease. This has previously been demonstrated for common biological molecules including DNA and proteins. However, it has always been a challenge to extend the idea of molecular evolution much beyond common biological molecules.

Study Results
The major challenge the team faced was how to develop an approach to allow point-of-care diagnosis of malaria that could distinguish when a patient is infected with Plasmodium falciparum parasites or Plasmodium vivax parasites. This is important as the two parasite species cause malaria with different outcomes and typically require different drug treatments. However, the point-of-care approaches which had previously been developed for malaria diagnosis typically were only able to determine whether a patient had malaria, but were unable to distinguish which parasite had caused the malaria.

To solve this challenge, the team developed and applied an entirely new approach where unusual cube chemistries, called cubanes, are included into DNA, and integrated into an evolution in a test tube approach. Cubanes are never observed in biology, and hence this is a rare example of applying evolutionary principles to an entirely non-biological system. The research team discovered new types of DNA incorporating these unusual cubane chemistries which perfectly fit the binding pocket of a malaria biomarker which specifically indicate Plasmodium vivax malaria infection.

This is amongst the first ever studies where non-biological molecules have been incorporated into a molecular evolution experiment. The study presents not only a way forward for better point-of-care diagnostics for malaria, but also opens up a new toolbox for the development of molecules for diagnosis and treatment of many diseases.

Previous Study Results
Over the last decade, the HKUMed team has been developing the use of aptamers for new approaches for diagnostics, particularly for the point-of-care diagnostics. The team had developed the idea of aptamers for malaria diagnostics with a previous study also published in PNAS in 2013, originally just using normal DNA molecules. Subsequently, the team developed a wide variety of point-of-care tests for malaria as published in Chemical Communications in 2015, American Chemical Society (ACS) Sensors in 2016 and Biosensors & Bioelectronics in 2018. The team demonstrated approaches for diagnosis of reproductive disorders published in Nature Communications in 2019. This is the first study where the team has extended the idea of aptamer selections out to chemistries which are alien to biology.

Acknowledgment
The Hong Kong aspects of this work were generously supported by the Shirley Boyde Trust, which was founded in memory of Shirley Anne Boyde.