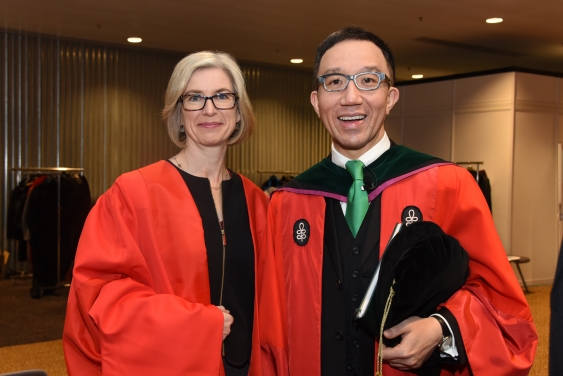 The Li Ka Shing Faculty of Medicine, The University of Hong Kong (HKUMed) is delighted to learn that Professor Jennifer A Doudna, who is renowned for her pioneering work on gene editing, has been awarded a joint Nobel Prize in Chemistry for her achievements.  Professor Doudna is Li Ka Shing Chancellor’s Chair Professor in the Departments of Chemistry and of Molecular and Cell Biology, President and Chair of the Governance Board of the Innovative Genomics Institute (IGI), at the University of California, Berkeley, USA.  The IGI began in 2014 through the Li Ka Shing Center for Genetic Engineering where Professor Doudna was Executive Director.

Professor Doudna and her collaborator and co-awardee, Professor Emmanuelle Charpentier, were the first to show, in 2012, that the CRISPR-Cas9 enzymes could be used to edit genomes, offering new hope for treating genetic diseases such as sickle cell anaemia, cystic fibrosis, Huntington’s disease and diabetes.

HKU congratulates Professor Jennifer Doudna on winning the 2020 Nobel Prize in Chemistry The University of Hong Kong (HKU) is delighted to learn that Professor Jennifer A. Doudna has received the Nobel Prize in Chemistry for her groundbreaking research in genomics. Professor Doudna was conferred an Honorary Doctorate of Science by HKU at the 198th Congregation in 2017. Her research sought to understand how RNA molecules controlled the expression of genetic information, which led to insights about CRISPR-Cas9-mediated bacterial immunity. In 2012, Professor Doudna and her colleagues made a discovery that relied on a protein named Cas9 found in the Streptococcus bacteria CRISPR immune system that worked like scissors. The protein attacks its prey, the DNA of viruses, and slices it up. This technology – precision ‘DNA scissors’ called CRISPR-Cas9 – could be used for efficient genome editing in animals and plants, and has exploded in popularity since it was first published and is revolutionising genetics, molecular biology and medicine. HKU President and Vice-Chancellor Professor Xiang Zhang extended his heartfelt congratulations to Professor Doudna on receiving the prestigious Nobel Prize in Chemistry for her pioneering work in genome editing, which has had a revolutionary impact on the life sciences and research, and with the creation of innovative crops for improving food security and new medical treatments. Professor Jennifer Doudna is a Professor of Molecular and Cell Biology and Chemistry at the University of California, Berkeley, where she holds the Li Ka Shing Chancellor’s Chair in Biomedical and Health Sciences, and is a Senior Investigator at the Gladstone Institutes. She holds a Bachelor of Arts degree in Chemistry from Pomona College and a PhD from Harvard University