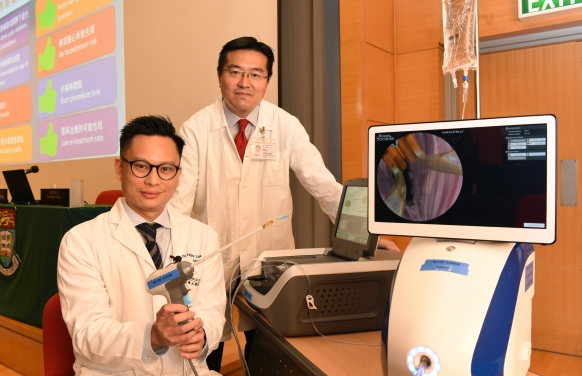 LKS Faculty of Medicine, The University of Hong Kong (HKUMed) has introduced and successfully carried out Asia’s first Water Vapour Thermal Therapy (also known as “Rezūm”) for patients with benign prostatic hyperplasia (BPH). The surgery was led and carried out by the Division of Urology of the Department of Surgery.

This treatment is aimed for men who have bothersome symptoms due to enlarged prostates. Using a minimally-invasive telescopic technique via the natural urethral meatus as access, sterile water vapour (steam) is directly injected into a man’s prostate. This subsequently causes the prostate gland to shrink, restoring normal flow of urine and significantly improves symptoms associated with BPH.

This novel technology has been approved by the US Food and Drug Administration (FDA). This technique minimises trauma caused to the patient during surgery, with the procedure completed between five to 15 minutes as a one-day hospital procedure under minimal anaesthesia. Studies have shown that this new surgery is able to provide excellent outcomes while minimising the risks of potential complications and side effects that are typically associated with traditional BPH surgeries.

Background
BPH is extremely common, with a prevalence of approximately 60% of men affected by the seventh decade of life in the Chinese population. BPH is frequently associated with progressive development of lower urinary tract symptoms (LUTS) such as slow urine flow, frequent urination, dribbling towards end of urination, persistent uncomfortable sensation of incomplete bladder emptying, frequent urination during night time, recurrent urinary tract infections, and complete inability to pass urine in severe cases which could in turn cause serious kidney injury. LUTS due to BPH have a negative impact on a man’s quality of life, and treatment of BPH has been a significant cost burden in healthcare.

Initial treatment of men with LUTS associated with BPH include lifestyle changes and medication therapies. In patients who failed treatment response to both, surgical intervention is recommended. Transurethral resection of prostate (TURP) has been considered as gold standard surgical treatment option for management of BPH for many decades. During TURP, excessive prostatic tissue that causes obstruction for urine to flow through the prostatic urethra is “trimmed” and removed. However, it is known to be associated with potentially serious complications such as significant bleeding and TUR syndrome (in which blood sodium level drops very rapidly to a dangerous level intra-operatively, which can potentially be fatal.)

Other limitations of TURP include requiring the patient to be under spinal or general anaesthetics, and the procedure usually takes approximately 60 minutes of surgical operative time alone. It also requires the patient to be hospitalised following surgery, with typical post-operative hospital length of stay of approximately two to four days. A vast majority of patients will also develop permanent ejaculatory dysfunction after surgery, which is a serious concern for men who have not yet completed their families. Typical recovery time following TURP is approximately six weeks.

Novel concept ∙ Simple technique ∙ Quick recovery
Water Vapour Thermal Therapy is a water-based therapy system, which utilizes the convective WAter Vapour Energy (WAVE) principle for ablation of prostate tissue. The system includes a power unit that generates thermal energy by condensation of the radiofrequency-heated sterile water vapour. The generated energy is stored and delivered using a single-use delivery system by deploying a fine curved needle. This needle punctures into the enlarged prostate under direct telescopic (endoscopic) vision and delivers the sterile vapour into the prostate. This large amount of energy is then dispersed rapidly through prostate tissue within the targeted prostate region uniformly. This subsequently leads to prostate tissue destruction. Consolidation and reduction in prostatic size occurs from the second week and continues over a few months following surgery.

A major advantage of this technique is that it can be done under minimal anaesthesia with a very short procedure time, allowing patients to be discharged on the same day. Studies have demonstrated that it is an effective treatment for BPH with a very low re-treatment rate on intermediate terms. It is also safe with minimal side effects, and is able to preserve ejaculatory function in vast majority of patients.

HKUMed is the first to introduce Water Vapour Thermal Therapy to treat BPH in Asia. It was first carried out in January 2020 on three symptomatic BPH patients. All three patients had restoration of urine flow while preserving their ejaculatory functions, with up to 49% reduction in prostate size within three months of surgery.

The unit at HKUMed has since shared their experience with other centres in Asia, hoping to extend this technology both locally and regionally.