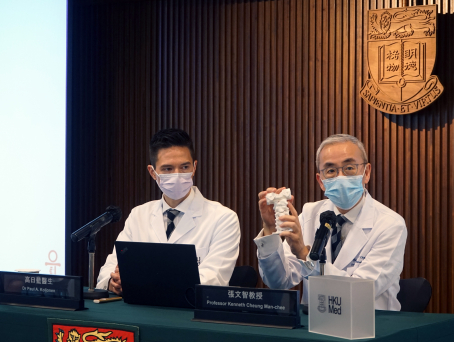 Orthopaedic surgeons at the Department of Orthopaedics and Traumatology of Li Ka Shing Faculty of Medicine, The University of Hong Kong (HKUMed) describe a unique paediatric cervical spine deformity, termed ‘Occipital-Atlantoaxial Rotatory Dislocation’ (OAARD), that could result in neck and facial deformity, permanently abnormal head and neck movement, and potential life-threatening neurological injury if left untreated. Parents and primary care physicians seeing children with a ‘wry neck’ are strongly urged to seek early specialist attention before it is too late. The HKUMed specialists also sternly advise against inappropriate physical treatment until proper assessment to avoid worsening the situation.

Background information
Atlantoaxial rotatory dislocation (AARD) is a paediatric spinal deformity typically affecting children under the age of 12 years, and is characterised by abnormal rotational dislocation between the first and second vertebrae of the neck. While the pathological manifestation of AARD has been well described in the medical literature, the combined dislocation of the cervical vertebrae and skull (occipital) joints, or OAARD, is a condition which has been poorly elucidated and underdiagnosed.

HKUMed orthopaedic surgeons believe that the pathogenesis of combined dislocation of the cervical vertebrae and the skull joints is most likely a result of delayed treatment, which can be triggered and/or exacerbated by inappropriate physical manipulations such as chiropractic treatment, manual physical therapy, or traditional bone setter treatment etc. The unique clinical and radiological features of OAARD lead to difficulty in diagnosis, and conventional treatment algorithms may not apply. In a recent peer-reviewed publication in the Journal of Orthopaedic Surgery [Link to publication], the research team describes a detailed combination of clinical and radiological features that can help clinicians correctly diagnose and treat OAARD.

Clinical findings
The HKUMed orthopaedics team characterised this condition by reviewing the worldwide literature and performing detailed clinical and radiological analyses of a number of local cases of AARD and OAARD admitted to The Duchess of Kent Children’s Hospital at Sandy Bay and Queen Mary Hospital in 2019-2021. The analyses included X-rays, dynamic computed tomography scans of the cervical spine and skull, and the use of 3D-printed spine models examining specifically the rotational relationships between the occiput (the skull bone), the atlas (the first cervical vertebra) and the axis (the second cervical vertebra). Between 2019 and 2021, a total of 10 cases of AARD and OAARD were treated, half of which required invasive halo-gravity treatment, and two eventually required cervical fusion surgery.

‘The findings suggest that if not recognised early, AARD could actually worsen by way of an abnormal counter-dislocation of the skull bone – a pathological process which may paradoxically improve the child’s external appearance, leading to a mistaken reassurance for parents and primary care physicians, and causing further delay in diagnosis and exposure to increased risk,’ remarked Dr Paul Aarne Koljonen, Honorary Clinical Assistant Professor, Department of Orthopaedics and Traumatology, HKUMed. He stressed that a high index of suspicion is needed to correctly diagnoses these cases.

Clinical significance
While isolated AARD can usually be successfully managed through non-operative means such as anti-inflammatory medication, neck bracing, and the occasional use of non-invasive halter cervical traction, delayed AARD and OAARD can carry a significantly poorer outcome for children – including the likely need for invasive halo-gravity traction (metal pins inserted into the skull bone), surgical fusion of the first two cervical vertebrae, or even surgical fusion of the skull to the cervical vertebra. Furthermore, the abnormal dislocation of the occiput and first cervical vertebra carries a theoretical risk of life-threatening neurological injury to the cervical spinal cord in case of unintentional trauma.

The surgical team at the Department of Orthopaedics and Traumatology, HKUMed emphasises the need for parents and primary care physicians to exercise a high index of suspicion in children presenting with neck pain and torticollis, or simply – ‘wry neck’. Early diagnosis and treatment of isolated AARD may help prevent irreversible secondary problems. Physical manipulation of the head and neck such as chiropractic manipulation, manual physiotherapy, and traditional bone setter treatment are not recommended as they may exacerbate occipital-C1 counter dislocation.

HKU geologists discover that the NASA rover has been exploring surface sediments, not lake deposits for last eight years