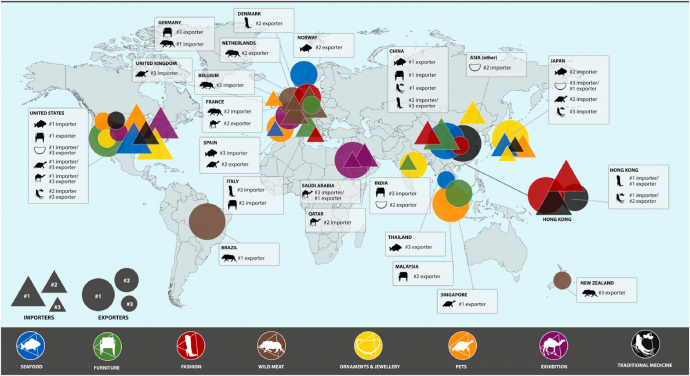 Biodiversity is declining at an unprecedented rate, due primarily to human activity. Illegal and unsustainable wildlife trade is one of the major drivers of these declines, while much wildlife trade is legal, and the quantity of trade provides the opportunity to launder illegally sourced and traded species and products.

Researchers from the Conservation Forensics Lab at HKU and Research Division for Ecology and Biodiversity, analyzed trends in global legal wildlife trade from 1997 to 2016, and revealed that legal wildlife trade averaged $220 billion per year over this period, approximately double the international trade in tea, coffee and spices, and eclipsing – by order of magnitude – annual trade in trafficked wildlife, estimated between $7-23 billion each year.

This tremendous legal trade is declared using the Harmonized System (HS) Code system, a global product classification system which is used for encompassing all traded commodities globally; in which, seafood, furniture and fashion were the largest categories of traded wildlife commodities.

The research shows that legal wildlife trade remains largely unexamined, despite its scale, and that 34% of trade is declared using overly broad codes that only specify taxonomic class and above. The research team therefore suggests that the HS Codes be distilled to increase traceability and help monitor trade. The paper has been published in the science journal Global Ecology and Conservation.

Hong Kong as a major transit hub
The vast majority of legal wildlife trade involved seafood (~82%), with the top trading countries being the USA, China and Japan. When removing seafood from the analysis, Hong Kong was the overall top wildlife trader globally, especially in trade for fashion (furs and skins) and Traditional Chinese Medicine (TCM). This indicates the pivotal role of this small territory as a major transit hub for global wildlife trade, especially as a re-exporter: more than 90% of the wildlife/wildlife products imported into the territory are re-exported. Additionally, Thailand and Vietnam are also important re-exporters, as they are among the top five exporters of “processed wildlife”. Targeting these locations for resource allocation (financial, personnel, training, equipment) in customs inspections of wildlife could have a maximum impact relative to investment.

This research, led by PhD student Astrid ANDERSSON from the Conservation Forensics Lab at HKU and Research Division for Ecology and Biodiversity, relied on data from the UN Comtrade database, which includes official statistics of international trade. The database uses the HS Code system, in which approximately 5,300 codes encompassing all traded commodities globally. Since the primary function of these code are to provide data for statistics and tax purposes, rather than the ecological considerations, it is not designed to track individual products, and can be very broad, with a single code encompassing up to thousands of species.

Breaking the broad codes for sustainability
Though the Convention on International Trade in Endangered Species of Wild Fauna and Flora(see note 1) (CITES) appendices track and regulate legal trade in more than 35,000 threatened species, there are still many thousands more species traded for which there is little-to-no traceability, for examples, various reptiles, birds and fish are traded at high volumes and diverse across major markets, and species-level information is lost in these general codes.

Andersson and her colleagues found that much legal wildlife trade is conducted under vague, all-encompassing codes with broad descriptions, some of which are used particularly frequently. For example, CITES does not cover many songbirds, fish, trees or plants traded. These species are often traded as pets, furniture or traditional medicine – the very categories identified as having frequent use of broad codes. The “Live reptile” code includes nearly 10,000 snake, lizard, turtle and crocodilian species, only approximately 10% of which are documented by CITES. In the pet category, 95% of trade in the pets category was declared under broad codes such as “Live ornamental fish”, “Other live birds” and “Live reptiles” – not allowing for tracking of trade of individual species. CITES only includes 162 species of fish – which leaves thousands of fish also traded untraceably under the “Live ornamental fish” code.

Critically endangered species such as Straw-headed bulbuls, a songbird popular in the pet trade due to their singing ability, have been driven nearly to extinction due to wildlife trade. Species that are currently common, such as the Oriental Magpie-robin, are increasingly seen in wildlife markets and without sufficient monitoring these could also face severe population declines across their range.

The current HS Code system may not be perfectly designed for tracking wildlife trade, but it is the only available method to date for tracking international legal trade for non-endangered species, and these trades are tracked via the CITES. The authors of the study suggest that the system could be refined to allow for better tracking of wildlife trade. “Our research constitutes a first step in uncovering the issues that are inherent in the current system, and detailing how it can be improved to protect biodiversity,” says Astrid Andersson, PhD student and author of the research. “We identify countries/territories where targeted enforcement could be particularly impactful, and priority wildlife trade areas for additional, species-specific code allocation,” she adds.

The current prevalence of broad HS Code descriptions provides a low-resolution trade landscape characterized by vague parameters preventing effective monitoring of trade. This impedes enforcement and results in undetected mislabeling of protected species by a number of means, including covert farming and trading in protected species, fraudulent declaration of wild-caught individuals within a farm-sourced shipment, and underreporting trade volumes. These issues would become more detectable if HS Codes relating to wildlife were broken down to genus or species level.

“Unsustainable trade in wildlife poses a major threat to biodiversity globally. While much international wildlife trade is legal, the scale of this trade can lead to unnoticed over-exploitation of species because we cannot properly monitor the level of trade,” says Dr Caroline DINGLE, Director of the Conservation Forensics Lab at HKU, Senior Lecturer from

the Research Division for Ecology and Biodiversity and co-author of the study. “It is important to have systems in place which allow us to monitor legally traded wildlife to prevent further biodiversity declines, and to continuously adjust these systems in response to new patterns of trade.” Dingle added.

Note 1: CITES (the Convention on International Trade in Endangered Species of Wild Fauna and Flora) is an international agreement between governments. Its aim is to ensure that international trade in specimens of wild animals and plants does not threaten their survival. https://cites.org

Ultraviolet ‘television’ for animals helps us better understand them