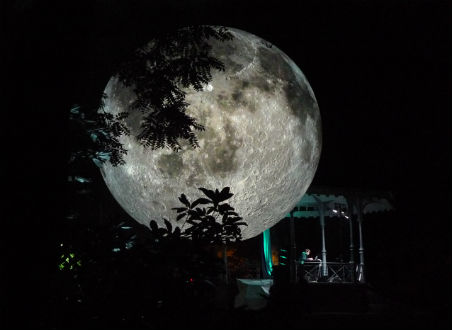 Delhi: A twenty-three-feet wide replica of the moon using imagery from NASA’s Lunar Reconnaissance Orbiter Camera and created with the UK Space Agency tours India this month. Museum of the Moon by British artist Luke Jerram will land at British Council on 23rd Feb and will be stationed in the building till 1st Mar to conclude the India tour on Holi.

The artwork has been travelling across the length and breadth of the country exhibited at celebrated locations including NGMA, Bangalore; Gateway of India, Mumbai; City Palace, Udaipur; Victoria Memorial, Kolkata to the final stop at British Council, Delhi from 23rd Feb- 1st Mar. The British Council has brought Museum of the Moon to mark the last phase of the UK-India Year of Culture and to launch 70 years of the British Council in India.

Museum of the Moon is half a million times smaller than the real moon – meaning one centimeter of it represents 5 kilometers of lunar surface. Alongside a unique visual spectacle, Museum of the Moon has music from award-winning British composer, Dan Jones. The opening event in Bangalore was timed to coincide with the first Super Blood Blue Moon and Lunar Eclipse in over 150 years.

British artist Luke Jerram says: “For eons the moon has impacted society and culture; it’s been worshipped as a deity, used as a timekeeper, and has inspired artists, poets, scientists, writers and musicians worldwide.

“Before gas lamps and electricity the moon was the only night-time source of light. It a vital light source for navigation and to work by. Living in cities, illuminated by electricity, we have in many ways become disconnected to the moon. I hope this project restores a sense of wonder, inspires questions and reconnects people with the night sky.” Mr. Jerram said.

Alan Gemmell OBE, Director India, British Council said, “2018 marks 70 years of the British Council in India and the end of the UK-India Year of Culture. We’ve been inspired every day of the last 70 years by the artists, students, scientists and policy makers we’ve worked with across India. This year, we want to share the stories of the great things we’ve done together, tell new stories, and inspire millions of young people to develop connections for the next 70 years. We hope our own moon landing at our home on Kasturba Gandhi Marg will be talked about for years to come”.

Alongside Museum of the Moon, the British Council is promoting the UK as a world-leading study destination and centre for science research. The British Council GREAT Talks feature world-renowned British scientists including Professor Monica Gardy CBE, Professor of Planetary and Space Science, Open University. Space-themed lectures will include: Women in Space; Life beyond Earth: Prospects and Possibilities; Going Back to the Moon; and, Landing on a Comet. The British Council StudyUK exhibition fair will see 60 British institutions visit Chennai, Kochi, Pune, Delhi and Mumbai in February.