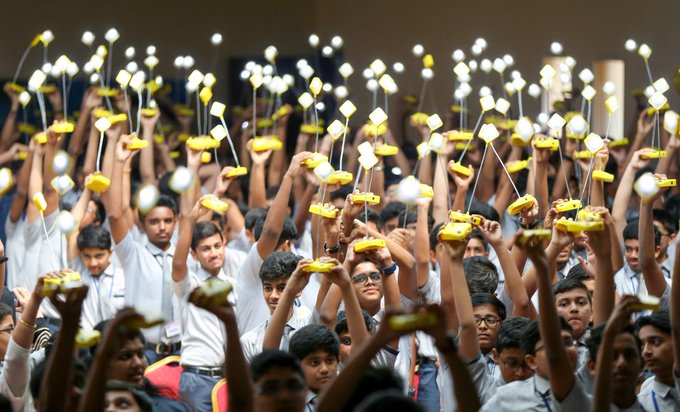 The first world record was in the category of ‘environmental sustainability lessons to the largest number of students at one place’. Close to five thousand children participated in this world record. Second record pertains to ‘the largest number of assembly & lighting of Solar lamps’. The number of participants in this record is more than five thousand and exact number will be released soon by the officials from Guinness Book of World Records who were present at the event.

Chief Guest of the event Union Minister Shri Prakash Javdekar congratulated all students saying that they had made a solar lamp with their hands and hearts. He also called for creating own oxygen bank by planting at least seven trees during one’s lifetime. The Minister expressed happiness over the fact that 79 countries have become member of International Solar Alliance. Shri Javdekar also administered the oath of non violence towards environment to all the students.

Speaking on the occasion, Power Minister Shri RK Singh said that world is facing serious threat from climate change. He said that we all should take pledge that we’ll leave a better world for our future generations. The Power Minister further said that future world will be the world of producer not the world of consumer as every home will produce power from solar.

Secretary, MNRE Shri Anand Kumar welcomed all participants and trainers and expressed happiness that so many students had taken pledge of non violence towards environment. He said that there couldn’t have been a better tribute to Mahatma Gandhi. He also read out Prime Minister’s message for the occasion in which PM highlighted the pivotal role that solar will play in fighting climate change.

A book titled ‘Energy Swaraj’ was also released and a short film on environment was screened for the participants.

Senior officials from the Ministry of New & Renewable Energy were present at the occasion.

Microsoft will be carbon negative by 2030