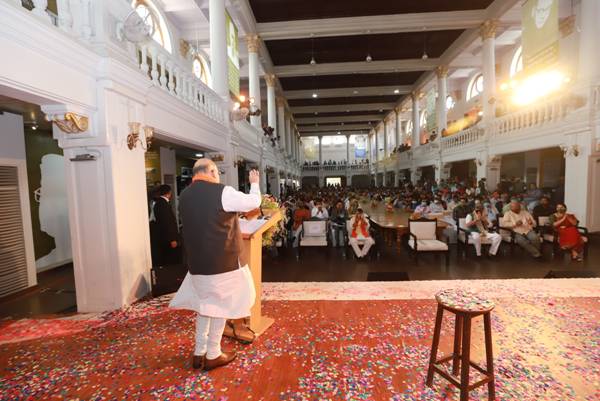 Kolkata: Union Home Minister Shri Amit Shah attended the ‘Shauryanjali’ programme, organized to commemorate the 125th birth anniversary of Netaji Subhash Chandra Bose, at the National Library in Kolkata today. On this occasion, Shri Amit Shah paid homage to the great freedom fighters of Bengal who laid down their lives in the freedom struggle of the country. He also inaugurated an exhibition showing the indomitable courage and valour of Bengal revolutionaries. A cultural programme based on important events of the freedom struggle was also presented on the occasion. The Union Home Minister also flagged off a cycle rally. Three teams, namely Netaji Subhash Chandra Bose, Rasbihari Bose and Khudiram Bose, are participating in the rally which will create awareness in different parts of West Bengal about the great sacrifices made by the revolutionaries of Bengal in the freedom movement. Several dignitaries, including Minister of State (Independent Charge) for Culture and Tourism, Shri Prahlad Singh Patel and Minister of State for Environment, Forest and Climate Change, Shri Babul Supriyo, also attended the programme.

Shri Amit Shah said in his address that the people of the country still have as much love and respect for Subhash Babu as he had in his lifetime. Shri Shah said that Subhash Babu’s personality, his patriotism and supreme sacrifice will remain in the minds of Indians for generations. Shri Shah also said that many efforts were made to erase the memory of Subhash Babu but it is the attempt of the Modi Government that generations to come will remember Netaji’s sacrifice. The Government of India, under the leadership of Prime Minister Shri Narendra Modi, has formed a committee which will ensure that the life and principles of Subhash Babu are remembered not only by Indians living in India but also by Indians everywhere in the world and taking inspiration from him, contribute to make India great.

Shri Amit Shah said that the Government of India is trying to revive the memory of Martyrs of our Independence and Nation building. That is why such programmes are designed that the younger generation should know and understand these things, as well as imbibe the rites of patriotism and sacrifice. Shri Shah said that the meaning of sacrifice is not just to give away one’s own life but also to put our all at stake to strengthen the nation’s existence, its progress and greatness. Shri Shah said that if Subhash Babu had only thought of his career, today we would not have had a glorious history of Azad Hind Fauj, crores of youth of the country would have been deprived of that inspiration on which the youth today, 125 years later, should proceed. Shri Shah said that this is a very important event as this function is a link to a series of programmes at the national and international levels to celebrate the 125th anniversary of Netaji Subhash Chandra Bose.

Shri Amit Shah also flagged off a cycle rally on this occasion, which has three teams. One team is named after Netaji Subhash Chandra Bose, which will cover a distance of 270 kms and will try to revive the memories of the martyrs, both famous and anonymous. The second contingent is the Rasbihari Bose contingent and the third group is named after Khudiram Bose. Shri Amit Shah congratulated all the cyclists participating in the rally and said that these youth riding their bicycles today, will work to inspire the youth of West Bengal by traveling about 900 kilometers across West Bengal. This will give new energy to West Bengal as well as the whole of India for a long time. Shri Shah also said that a nation whose young generation does not understand the spirit of freedom and does not pride itself, cannot come together in building the country’s future, so it is essential to know and respect those who sacrificed their lives for the country. Shri Shah said that history needs to be understood from a new perspective today.

Shri Amit Shah said there are many such families in the country, many such people whose entire property, houses have been confiscated scores of times but they did not stop fighting. Veer Savarkar was the only freedom fighter who was handed down two life sentences in one lifetime. India has attained its present status at the altar of their martyrdom. Shri Shah said that these people who sacrificed their lives for the country did not just lay down their lives for the sake of freedom but also made the supreme sacrifice so that India once again emerges glorious as the World Guru. Recalling the role of Sri Aurobindo, Shri Amit Shah said that the contribution of this son of Bengal is incomparable and we should devote our lives to realise the words of Sri Aurobindo into reality. Crowds will gather to pay homage at martyrs’ memorials every year, such is the memory of those who die for the country, I want to take it a step further and say that we must assemble to pay respects to them, but it is necessary to dedicate our lives to fulfill the mission for which they made the supreme sacrifice

Over 2.6 million trees were planted in India, providing rural employment during the pandemic

Ed-tech start-up Geekster aims at upskilling over 1,000 aspirants in next two…