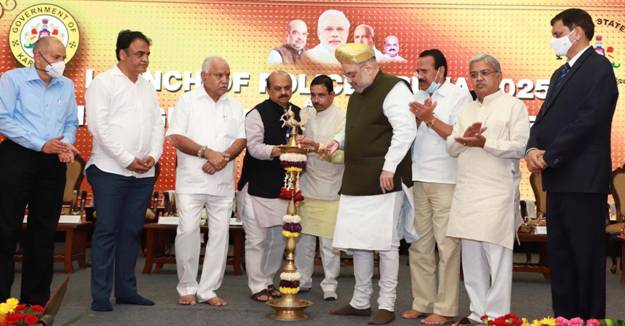 New Delhi: The Union Home Minister Shri Amit Shah inaugurated three different projects in Bengaluru, Karnataka. Greeting the people on the occasion of Makar Sankranti festival, Shri Amit Shah, in his address on the occasion, said that ‘Vaccination’, an important stage in the fight against Corona, started today under leadership of the Prime Minister Shri Narendra Modi. Shri Shah said that it is a matter of pride for all of us that both the vaccines have been made India. Shri Shah also said that in a way a situation will be seen in the next couple of months when India, under the leadership of Modi ji, will lead the world in the fight against Corona as the process of vaccination picks pace across the world.

Shri Amit Shah said that due to Modi ji’s policy in India, the Central Government together with the State Governments and 130 crore people stood steadfast in the fight against Corona. The Janta Curfew to enforce the lockdown norms was voluntarily followed by everyone. Then there was this programme of creating awareness by clanging serving steel plates and ringing bells, followed by tributes to the Corona Warriors by lighting oil lamps.

Shri Amit Shah said that the fight against Corona in Karnataka under the leadership of Chief Minister Shri Yediyurappa has been fought very well and the Karnataka Police, especially in Bengaluru, did extremely commendable work.

Shri Amit Shah said that today 112 Extension has been launched and 150 vehicles are linked the ERSS. Also, the 15-15 formula given by Karnataka Home Minister Shri Bommai in which there will be response within 15 seconds and contact established within 15 minutes is a wonderful effort. He expressed confidence that the Government of Karnataka will achieve this goal. Shri Shah said that housing is a big problem for the police and with the launch of the housing project today, the target set by Shri Bommai to bring the housing satisfaction ratio above 65 percent by 2025 is a very good effort. India Reserve Battalion, Vijaypura has also been raised today. A worthy system will be created by recruiting youth in the India Reserve Battalion with a total investment of 105 crores.

Shri Amit Shah said that Modi ji has done a lot of work for Karnataka and both the Center and the State Government are committed towards development of the state. Whether it is structural work, financial assistance, police modernization, improvements in education or in the interest of farmers, the Central Government stands with the people of Karnataka in every field.