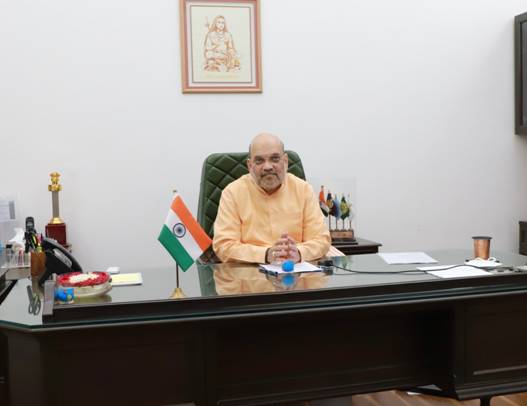 It is Vision of Prime Minister Shri Narendra Modi that System can be Changed only When Its Machinery is Trained According to The Needs of Today Police Should Move Towards Just Action by Avoiding Inaction and Extreme Action "Dialogue and Sensitivity" are Necessary to Improve Image of The Police, That is why along with Sensitizing All Policemen, There is A Need to Increase Communication and Public Contact Police Officers of Level of Superintendent of Police and Deputy Superintendent of Police should go to Tehsils and Villages to Meet People and Stay Overnight Sardar Patel Had said That if We Do Not Have A Good All India Service Then The Union Will End and India Will Not Be United, It Is Your Responsibility to Strengthen The Federal Structure and Maintain Integrity of The Country The More Police Officers Make Investigations Scientific and Evidence-Based, The Less The Need for Manpower Modi Government has Taken Many Important Steps Against Cybercrime in Three Years, Created Four Organizations to Deal with Cybercrime Emphasize on Upgradation of Police Constables, Police Officers Should Work for It Throughout Their Life Besides Probationary Officers of 72nd Batch of Indian Police Service, Police Officers From Nepal, Bhutan, Maldives And Mauritius also Participated In The Program

New Delhi: The Union Home Minister, Shri Amit Shah today interacted with the Probationary Officers of the 72nd Batch of the Indian Police Service (IPS) through video conferencing. Union Minister of State for Home Shri Nityanand Rai, Union Home Secretary, Director of Sardar Vallabhbhai Patel National Police Academy and senior officials of the Ministry of Home Affairs were also present on the occasion. The Union Home Minister, while paying homage to police and health workers who lost their lives during the COVID-19 pandemic, extended his greetings on the occasion of Doctor’s Day and Chartered Accountants’ Day (CA Day).

Interacting with the young police officers, Shri Amit Shah said that a system is very important for any organization. He said that any organization runs successfully only when those who run it become a part of the system and work to strengthen it. By improving the system of the organization, the organization automatically improves and gives better results. Shri Shah also said that making the organization system-centred is the key to success. The Home Minister said that it is the vision of Prime Minister Shri Narendra Modi that the system can be changed only when its machinery is trained according to the requirements of today. He said that the seed should be planted in training itself to remove the problems, so that a person can be made more and more responsible and dutiful. Shri Shah said that training works to mold the personality, way of working and the whole personality and if training is done properly, then it brings good results throughout life.

On improving the image of the police, Shri Amit Shah said only policemen will have to work for improving their image. The Home Minister said “communication and sensitivity” is necessary to improve the image of the police, that is why there is a need to sensitize all policepersons as well as increase communication and public contact. Shri Shah said it is very difficult to gather information about crime without public contact, therefore police officers of the level of Superintendent of Police and Deputy Superintendent of Police should go to Tehsils and villages and meet people and stay overnight. Along with this, they should also interact with the people living under the jurisdiction of important police stations in their area.

Shri Amit Shah told the young police officers that all of them have allegiance to the Constitution and the law of the country. He said that the important responsibility of criminal law is going to fall on your shoulders and a little haste in it can do injustice to anyone. So you should work very carefully. The Constitution of the country has given the right to security to every citizen and it is your duty to provide security. Shri Shah said that the country’s first Home Minister and Iron Man, Sardar Vallabhbhai Patel did the work of uniting the country and without him we cannot even imagine a modern India. He said that when the country became independent, there was a lot of debate about All India Services and at that time Sardar Patel had said that if we do not have a good All India Service, then the Union will end and India will not be united. Therefore, all of you have to always remember that it is your responsibility to strengthen the federal structure and maintain the integrity of the country.

Emphasizing on the need for scientific investigation, the Union Home Minister said that the more scientific and evidence-based the investigations will be, the less the need for manpower. He said that police officers should start such a project in which the available manpower can be better and more optimally utilized. He said that the Modi government has taken several steps in the direction of scientific investigation, under which the National Raksha Shakti University was established last year and the National Forensic Science University was also established to take investigations forward from the crime scene to the courtroom. He said that both the universities in the coming decades would make a significant contribution in strengthening the law and order situation in India. The Union Home Minister also said that the government has made several important efforts against cybercrime in the last three years and has formed four organizations to deal with cybercrime. He said that there is a need to spread rapid awareness about cybercrime. The Home Minister said that along with cybercrime, several steps have also been taken to deal with economic crimes and narcotics.

Stressing on the upgradation of police constables, Shri Amit Shah said that police officers should work for it throughout their life. He said constables make up 85 percent off the strength in the police forces and are an important part of the police system. Shri Shah said that if we do not take care about their better training, health, good work environment and shelter, then can the remaining 15 percent people run the organization well? Shri Shah said that the most difficult duty in the police is that of constables, so it is very important to provide them all the necessary facilities and have sensitivity towards them.

The Union Home Minister said that voters, elected representatives and the bureaucracy together complete the structure of democracy. People’s representatives are elected for a term of five years while government officials serve for 30 – 35 years. He said that probationary police officers are an important part of democracy and the constitutional system. Shri Shah said that they will have to be sensitive towards the concerns of the poor, backward, Dalits and tribal people and work for the progress of the country.

Shri Amit Shah said that officers of All India Services, especially IPS officers, should stay away from publicity. The urge to seek publicity hinders work. He said that although it is difficult to stay away from social media in the present times, police officers should stay away from it and focus on their duties. Before leaving the Police Academy, Shri Shah said, all of you should take a vow that every day you will make a note in your diary whether the work you have done was done only for the sake of publicity.

Shri Amit Shah said that the concept of “Side Posting” has come in the police system. He said that you should avoid thinking of such concepts because there is no such work in the police system which is not of importance. Shri Shah said that because of this you will remain under stress and many times you will not be able to do your work properly under the fear of being transferred. He said that if you make up your mind to take transfers in their stride, then the pressure and stress on you will be greatly reduced. You will be able to do your duty better once you overcome the fear of transfers.

While congratulating the young officers for joining the Indian Police Service, the Union Home Minister said that they have the zeal to work and solve problems. Shri Shah said that he has full faith in these young officers to fulfill the expectations of the Prime Minister, Shri Narendra Modi. Police officers from Nepal, Bhutan, Maldives and Mauritius also participated in the programme besides probationary police officers of the 72nd batch of the Indian Police Service.

Technical University of Munich: Catalyzing the conversion of biomass to biofuel