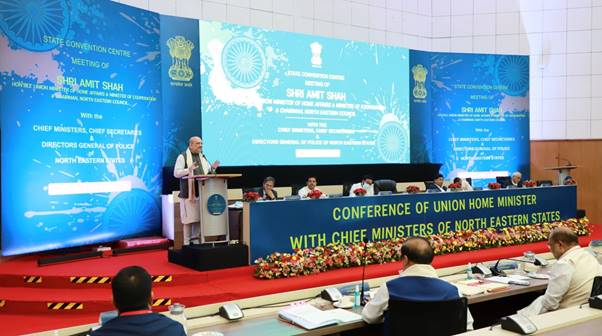 New Delhi: Union Home Minister, Shri Amit Shah, today laid the foundation stone for the Multipurpose Convention Centre and Exhibition Facility of the North Eastern Space Applications Centre-NESAC, in Shillong. President of NESAC Shri Amit Shah also presided over the high-level review meeting regarding the operation of Space Science and Technology Centre. Union Home Minister chaired another review meeting with the Chief Ministers of all the North – Eastern States to discuss the developmental and security issues.

Shri Amit Shah in his address said that Shri Shah said that the development journey of Northeast in the last six and a half years after Shri Narendra Modi ji became the Prime Minister 2014 is far ahead if compared to the development in the last 70 years. Shri Narendra Modi has worked to connect North-East with rail connectivity, air connectivity and road connectivity as well as IT connectivity. The Hon’ble Prime Minister called these group of 8 states as Ashtalakshmi and today all the eight with the mutual cooperation these states are moving ahead on the path of development.

The Union Home Minister had directed the use of NESAC for flood management in the North Eastern States in the NESAC meeting in January, in today’s meeting he was told that drafts of 110 projects have been prepared in this regard. Expressing happiness over this, Shri Amit Shah directed to store water in big ponds to make Northeast flood free

The Union Home Minister said that In comparison to the Thirteenth Finance Commission, 14th Finance Commission provided financial resources of more than 251% to the Northeast and in the upcoming 3 years, developmental works will be done to provide all the facilities to the villages by using it prudentaly.

Union Home Minister added that earlier there was talk of infiltration, terror and corruption in the Northeast but today there is talk of development, connectivity, infrastructure and development. He said that under the leadership of Shri Modi ji, the issues troubling the North-Eastern region for decades have been resolved, which includes the border dispute with Bangladesh, the peace pact with NLFT, resolution of problems of Bru-Refugees in Tripura and Mizoram and the Bodo Peace Accord.

Shri Amit shah said that NESAC’s role will be of utmost importance in making the Northeast drug free and terrorism free and developed. Our plans will get scientific basis through NESAC Society and on this foundation a developed North-East will be made. With the coordination of MHA and NESAC, a single window system will be made so that the states can get real time information about floods and other disasters.

Shri Amit Shah said that it is a matter of great pride for all of us that Manipur’s daughter Mirabai Chanu won the silver medal for India in the 49 kg weightlifting category at the Tokyo Olympics today. In the meeting with the Chief Ministers of North- Eastern region Shri Amit Shah emphasized on the importance of making the terrorism free North-East.

Appreciating everyone for the remarkable improvement in the security situation in the North-Eastern states in the last years, Shri Amit Shah asserted for early implementation of the peace agreements. In this context, the Home Minister referred to the solution of decades old problems like Bru resettlement in Tripura and the Bodo agreements in Assam. Shri Amit Shah requested the Chief Ministers to resolve the border disputes of the states expeditiously in a cordial atmosphere by mutual consultation.

The Union Home Minister said that the Government of India under the leadership of Hon’ble Prime Minister Shri Narendra Modi has taken many far-reaching steps to develop the infrastructure of the North Eastern States under the “Act East” policy. The northeastern states are being linked with the ports of Chittagong in Bangladesh and Sittwe in Myanmar. Important roads of North Eastern states are being upgraded by making them National Highways and hill states like Arunachal Pradesh, Meghalaya, Manipur, Nagaland and Mizoram are being connected by rail.

Shri Amit Shah stressed on the promotion of tourism keeping in view the natural beauty of the northeastern states. The meeting was attended by the Minister of DoNER (DoNER) Shri G.Kishan Reddy, Minister of Science & Technology and Department of Space Dr. Jitendra Singh and Minister of State for DoNER Shri B. L. Verma, Union Home Secretary, Chief Secretaries of all North Eastern States and Director General of Police and other senior officers were also present.